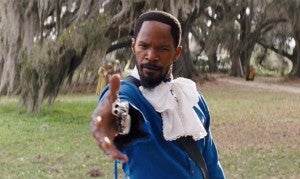 When Variety broke the story earlier today that Academy Award-winning actor Jamie Foxx was considering joining the cast of the second Amazing Spider-Man movie, they described the actor as being in "early talks," which basically means there's a chance but nothing is set.

But Foxx seems to be teasing that he's already made up his mind.

"Dressed up as Electro for Halloween last night," the actor tweeted right after the news broke. "Costume fits well."

Obviously, he could just be having a little fun with people, but...

The Amazing Spider-Man: Jamie Foxx May Be Closer Than You Think