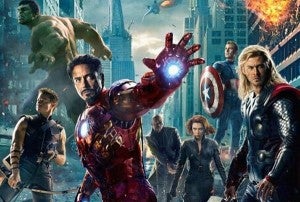 grossed an estimated $15.3 million domestically yesterday, well ahead of the two new releases for which it's expected to be competing for the weekend box office crown.

Battleship, the Peter Berg-directed adaptation of Hasbro's beloved strategy game, grossed a respectable $9 million on Friday, coming in second ahead of The Dictator, Sacha Baron Cohen's latest effort, which took in $5.7 million. That means that if the estimates hold, The Avengers took in more money yesterday than the #2 and #3 movies combined. Coming in fourth is Lionsgate's star-studded romantic comedy What to Expect When You're Expecting, which pulled in just $3.85 million, barely eclipsing last week's disappointing #2 film, Tim Burton's update of Dark Shadows.

Earlier in the week, Box Office Mojo predicted that The Avengers would take the weekend with around $53 million while they expected Battleship to make somewhere in the neighborhood of $40 million. It's hardly unprecedented, as Universal has met defeat at every turn in the international market, with early releases of Battleship being beaten by The Avengers handily in most countries.

The Avengers, now in its third week of domestic release and its fourth week of international release, continues to set records and has thus far devoured all comers at the box office. This weekend is widely expected to be the final week of its dominance at the top of the charts, though, as Men in Black III will be released next weekend and should open bigger than even a juggernaut like The Avengers can muster in its fourth week of release.

The Avengers on Pace to Win Box Office in a Walk