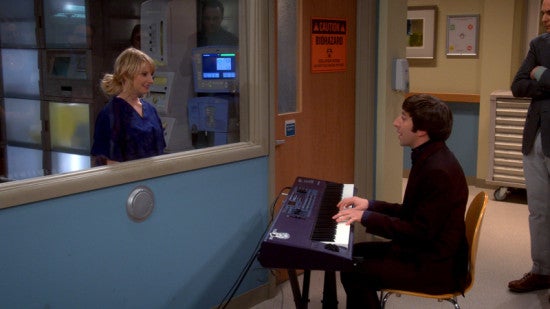 Warner Bros. Television announced yesterday that The Big Bang Theory has joined the likes of Glee, Nashville and The Walking Dead with the release on iTunes of an original song performed by the cast.

In the Thursday, October 24, episode “The Romance Resonance,” the plans Wolowitz (Simon Helberg) has to celebrate the anniversary of his first date with his microbiologist wife Bernadette (Melissa Rauch), are thwarted when a lab incident leaves her temporarily quarantined. In a romantic gesture, Howard performs the original song “If I Didn’t Have You (Bernadette’s Song)” outside her hospital room, with his friends Leonard (Johnny Galecki), Sheldon (Jim Parsons), Penny (Kaley Cuoco), Raj (Kunal Nayyar) and Amy (Mayim Bialik) singing backup.

Yes, we know that if you've read this far you probably didn't need to have the actors' names in parentheses...but given the fact that it's their names, not their characters' names, who appear on the single, it's worth refreshing memories.

The cast recording of the song — distributed by WaterTower Music — features Helberg singing lead with Galecki, Parsons, Cuoco, Nayyar and Bialik providing backing vocals. “If I Didn’t Have You (Bernadette’s Song) [MusiCares version]” can be downloaded on iTunes now, in recognition of the show’s support of MusiCares. Essentially the Hero Initiative, but for musicians, MusiCares provides a safety net of critical assistance for music people in times of need. MusiCares’ services and resources cover a wide range of financial, medical and personal emergencies. MusiCares also focuses the resources and attention of the music industry on human service issues that directly impact the health and welfare of the music community.

“If I Didn’t Have You (Bernadette’s Song)” was written by comedian, singer-songwriter and The Big Bang Theory recurring guest star Kate Micucci (who played Raj’s ex-girlfriend Lucy) and her music partner Riki Lindhome, who perform as the comedy folk duo Garfunkel and Oates. You can check out the scene from the episode in which the song is performed below.