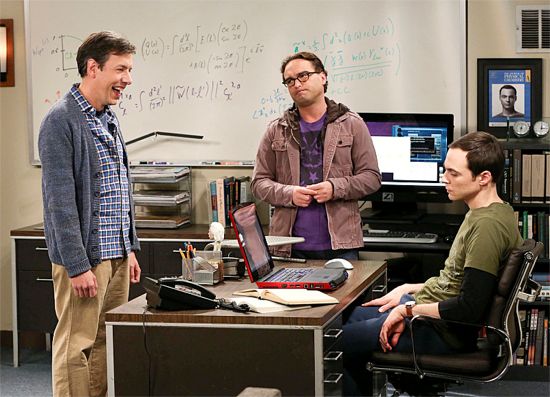 “The Discovery Dissipation” episode of The Big Bang Theory opens with a recap of Sheldon’s discovery of a stable, super-heavy element. Then, the scene jumps forward to Sheldon doing a radio interview. The DJ brings up that Sheldon discovered the element by mistake, and Sheldon says the University made him do the show. The DJ says some people are calling his discovery, “The Wonder Blunder.” Sheldon eventually gets frustrated with the interview and storms out.

Back at the apartment, Sheldon is on the phone, getting chewed out by the University President for the radio interview. After getting off the phone, Sheldon whines to Penny, Amy, and Leonard about being celebrated for something he wished he never did. Penny says Sheldon’s clearly never been with her at Mardi Gras.

Meanwhile, Bernadette is cleaning up their apartment, because Howard’s friend Raj is coming to visit. Bernadette thinks Raj is just coming for a night, but Howard reveals that he’s staying for a whole week.

Sheldon is in his room alone, playing with a toy train. Amy brings Wil Wheaton by to cheer Sheldon up. In an attempt to relate to Sheldon’s problems, Wil tells Sheldon that when he was a kid and played Wesley Crusher on Star Trek that some people didn’t like his character and took it out on him. Wil says he never thought he would get out of Wesley Crusher’s shadow, but not it’s just a small part of a pretty great life. Wil starts to play trains with Sheldon, but when Wil asks to blow the whistle, Sheldon asks him to leave.

When Bernadette gets home late from work, she asks Howard and Raj if they’ve already eaten dinner. But Howard says they were waiting on her. When Bernadette says that sweet, Howard asks her what she’s making. Raj admonishes Howard that Bernadette just got home from work and goes and gets a glass of wine for Bernadette.

Leonard tells Sheldon that he disproved his element that the Chinese team faked the results. While Leonard expects Sheldon to be happy, Sheldon is upset that Leonard robbed him of his greatest achievement. Leonard asks Sheldon if he should hide the data and not publish it, but Sheldon insists that would be unethical. When Leonard says that he’ll publish then, Sheldon complains to Penny, “Can you believe this guy?”

Raj brings back coffee for Bernadette and hot chocolate for Howard. Raj tells Bernadette that she’ll do great with her presentation, but Howard doesn’t know what the presentation is. After Bernadette leaves, Howard complains to Raj that he’s making him look bad by being a better husband than him.

Leonard stops by Sheldon’s office to tell him that he published the paper disproving his element. Barry stops by to make fun of Sheldon. Sheldon makes fun of Barry’s speech impediment, but he apologizes after Barry’s feelings get hurt.

Raj, Howard, and Bernadette are eating dinner together. After Raj pays Bernadette a nice compliment, Bernadette asks Howard why he can’t be more like Raj. Howard asks Bernadette why she can pack his lunch like Raj did. Howard and Bernadette get into an argument, but then they realize that Raj is causing the problems.

Raj has been kicked out of Howard and Bernadette’s apartment. He’s now offering up advice to Leonard & Penny and Amy & Sheldon. At first Amy thanks him for his advice, but then when Raj gets too personal, she tells him he should probably go.

Sheldon and Leonard are both doing a radio interview. The DJ is trying to interview Leonard about disproving Sheldon’s theory, but Sheldon keeps interrupting. Both Amy and Penny are listening, and Penny says it would be a great drinking game to take a shot every time Sheldon and Leonard said something embarrassing. Amy offers to get the vodka.