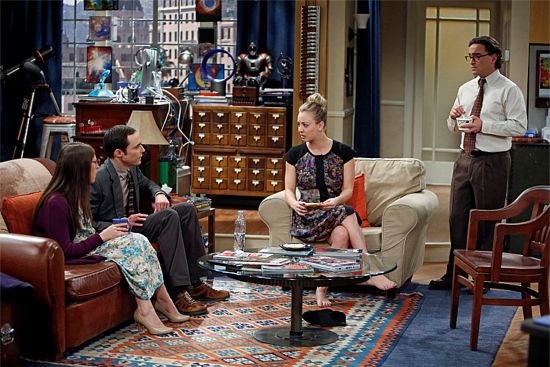 The “Thanksgiving Decoupling” episode of The Big Bang Theory begins with Penny, Raj, Leonard, and Sheldon sitting around discussing if cow tipping is actually scientifically possible. Sheldon doesn’t think it is, but Penny remembers doing it when she was younger. Howard shows up and invites the gang to Thanksgiving dinner at his mom’s house. Sheldon initially refuses, but after some badgering from Leonard and Penny, Sheldon reluctantly agrees.

Later that day, Sheldon is still complaining to Amy about having to go to Howard’s mom house. Sheldon compares it to knowing how the African slaves felt, and Amy is shocked that Sheldon would compare something so trivial to one of the greatest tragedies in the history of mankind. Penny reveals that she one time had a fake wedding with a guy she was dating named Zack at a wedding chapel in Vegas, but Leonard points out that those wedding chapels are real.

In the car on the way to Howard’s mom, Sheldon and Amy argue over Sheldon continuing to compare his plight to that of the slaves, while Leonard and Penny argue over Penny’s Vegas wedding.

At Howard’s mom’s house, Raj is cooking Thanksgiving dinner while Bernadette unpacks groceries. Bernadette sends Howard in to the living room to spend time with her dad.

When Penny, Leonard, Amy, and Sheldon arrive, Amy goes into the kitchen to help with the cooking. Amy tells Bernadette and Raj that Penny married Zack.

In the living room, Leonard is whining about Penny being married, when she gets fed up and storms off into another room. Bernadette’s father weighs in that they should be quiet because he’s trying to watch the game. After Bernadette’s father complains about a play in the game, Sheldon makes a surprisingly insightful football observation. Sheldon reveals that his dad used to make him watch the games when he was a kid. Penny returns and reveals that she called and invited Zack over to sign an annulment.

Howard goes in the kitchen to whine about how Bernadette’s dad and Sheldon are bonding, but Raj, Bernadette, and Amy run off when they hear Zack has arrived. Everyone gathers around to watch Zack sign the annulment, but Zack says he’s not sure if he wants to sign it. Penny and Leonard start arguing, and Zack tells him that he’s not sure if Leonard is the type of guy he wants dating his wife. Finally, Zack relents and signs the annulment papers.

Bernadette’s dad and Sheldon continue to bond over beers on the couch. Sheldon makes fun of Howard, calling him a clown. Bernadette comes out and yells at them to apologize to Howard. Sheldon initially just laughs at Bernadette, but then Amy tells Sheldon to apologize so he does. Then, Sheldon says Amy is great, slaps her on the behind, and tells her to get them a couple beers. Amy seems rather pleased with Sheldon slapping her on the butt.

Everyone is sitting around enjoying Thanksgiving dinner, when Bernadette’s dad asks Sheldon to go outside and throw around the old pigskin. Sheldon says that it’s a Jewish household so he doesn’t think they have pigskin. Bernadette’s dad tells Howard that he’s not the worst son-in-law in the world. When Howard says that’s the nicest thing he’s ever said to him, Bernadette’s dad says he’s drunk.