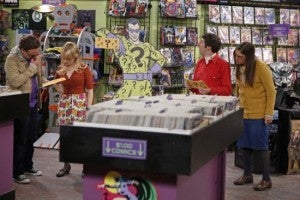 On the “The Scavenger Vortex” episode of The Big Bang Theory, Raj plans a scavenger hunt for the group. Raj tells the group that he hid a gold coin somewhere in the city of Pasadena, but they’ll have to complete ten puzzles to find the coin. By drawing names, the group divides up into three teams of two: Sheldon and Penny, Leonard and Bernadette, and Howard and Amy.

The first puzzle points the teams toward the comic book store. At the comic book store, the puzzle is a riddle from The Riddler. The riddle reads, “Riddle me this, Arrah, Arrah, and gather round, the work of this hero is legion bound. He multiples N by the number of HE and in this room the thing you’ll see.”

Sheldon is first to solve that the riddle is for the geology lab. When Penny asks how he solved the riddle, Sheldon explains, “The word Arrah, Arrah in the riddle meant Jan Arrah, a member of the Legion of Superheroes, who is known as Element Lad. Then the word “HE,” it wasn’t the masculine pronoun, but rather HE, the abbreviation for Helium. Element Lad’s ability is the power to transmute chemicals elements. Helium has an atomic number of 2. If you multiple that by the atomic number of N, nitrogen, you get fourteen, which is the atomic number of Silicon, and that is the most common element in the Earth’s surface. So that narrowed it down to the geology lab or the chemistry lab. Finally the line "in this room the thing you’ll see" was an obvious reference to Fantastic Four member The Thing, who’s made entirely of [rock].”

After completing the remaining puzzles, team Leonard and Bernadette and team Sheldon and Penny are in a dead heat. As they are searching through a bag of laundry, they find one of Sheldon’s shirts with a spot on it, which they realize is a reference to Sheldon’s spot on the couch.

As Leonard, Penny, and Bernadette hastily search through the couch, they can’t find the coin. Raj appears and tells them to check their pockets. It turns out that each of them has a gold coin in their pockets, which Raj had slipped into their pockets earlier in the day. Raj explains, “Don’t you see, when we’re all having fun together, we’re already winners.”

The group doesn’t take kindly to their not being a true winner. Raj explains, “Come on, I didn’t want anyone to feel bad at the end of the game. And some of those puzzles were really hard, and I didn’t know who was going to get Penny.” Penny warns Raj to run, who takes off running down the stairs past Sheldon.