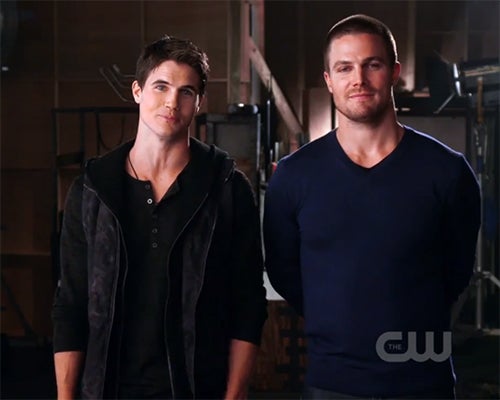 The CW have released their midseason lineup, and "Amell Wednesdays" have been broken up, with The Tomorrow People moved to Mondays and new series The 100 being moved to Wednesday nights at 9 p.m. to take advantage of Arrow's lead-in.

The 100 is a post-apocalyptic drama that follows humanity as it tries to repopulate Earth after a cataclysmic event.

Also set to debut on the midseason schedule is Star-Crossed, the futuristic story of an alien/human romance, airing Mondays at 8 p.m. starting on February 17. Comics writer Jay Faerber is among the series' writers. That series will now serve as the lead-in for The Tomorrow People, which will air that same night at 9, giving the network an established(ish) success along with a promising newcomer to run in two-hour blocks on each of the nights.

Arrow is one of The CW Network's biggest hits, and when they paired it with the new series The Tomorrow People earlier this year, The CW successfully managed to use the show as a strong lead-in to help the new series find its footing.

At first, it seemed that the The Tomorrow People--which stars Robbie Amell, cousin of Arrow star Stephen--was more or less tied to its Arrow lead-in, with ratings rising and falling based on what happened with Arrow over its first several weeks. More recently, though, it seems to have found its audience and carved out a separate identity.

The CW Breaks Up Amell Wednesdays, Will Use Arrow as New Series Lead-In Again