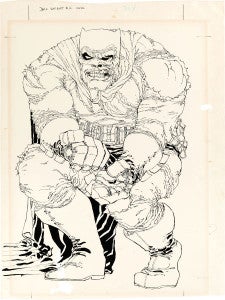 Heritage Auctions, the same auction house at which an interior splash page from Frank Miller and Klaus Janson's The Dark Knight Returns sold for over $400,000 two years ago, has just sold the cover to #2--the image at right of a battered-but-still-fighting Batman--for $478,000 at auction, the third-highest amount ever paid for a piece of original comics art at a public auction.

What's more? According to the auction site, "This item's Owner is proactively entertaining Offers."

Now, there's also a "Claim Ownership" button below, which allows anyone who bought the piece later to claim it and be the one to whom those offers are sent--so it's possible that the buyer didn't actually say they were looking to flip the piece, but it wouldn't be entirely surprising if they were.

After all, it wasn't that long ago that a Todd McFarlane Spider-Man cover went for over $650,000--that's more than $200,000 more than the aforementioned Miller splash page, which was the then-current record holder. It's clear that key pieces of American comics art such as this are rising sharply at present, and while it may not be a trend that keeps up, it's likely that as long as the movies are grossing in the hundreds of millions and dominating the annual box office year after year, there will be significant demand for the unique pieces of the characters' history.

The value of the piece may have been goosed somewhat by the fact that two weeks ago, Zack Snyder and Man of Steel star Harry Lennix staged a dramatic reading from The Dark Knight Returns as part of their announcement that the film's sequel will include Batman.  The filmmakers have reportedly reached out to Frank Miller to advise on the film in some capacity. Snyder has an existing relationship with Miller, having adapted the veteran comics writer/artist's original graphic novel 300 into a film. Snyder is producing 300: Rise of an Empire, based on a story by Miller, who will be writing a new graphic novel to accompany the film.