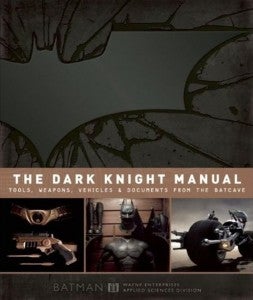 Two new books scheduled to be released this month promise to reveal more secrets of The Dark Knight. Christopher Nolan has kept The Dark Knight Rises shrouded in mystery, so any new info on the movie is highly sought after. The Dark Knight Manual and Batmobile: The Complete History will reveal details and the secrets of the technology and vehicles that make up Nolan’s Batman trilogy.

Here’s the description for The Dark Knight Manual. “For the first time, the Dark Knight's secrets are revealed in The Dark Knight Manual, which details all of Wayne's cutting-edge collaborations with Lucius Fox at Wayne Enterprises. The Manual gives readers unprecedented access to Batman's amazing arsenal featuring numerous documents and items including: designs and upgrades for the Batsuit, the specifications of the Utility Belt, blueprints for the Batcave, detailed dossiers on foes and allies, plans for the Dark Knight's latest vehicles, and much, much more. All these, and a plethora of never-before-published materials, shine a light on how the mysterious Bruce Wayne operates as Gotham City's greatest protector.”

Here’s the description for Batmobile: The Complete History. “Batmobile: The Complete History is the story of the distinct, sophisticated, incomparable car. From its evolution in the pages of Detective Comics, to its unforgettable appearances on the big screen, this book explores each incarnation of the Batmobile with the detail such an extraordinary automobile warrants. Author Mark Cotta Vaz uncovers insights and stories from creators and conceptualists that reveal the nuts and bolts of putting these dream machines together and explains the philosophies behind 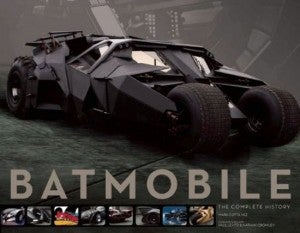 each design. With stunning gatefolds-including a large-scale panorama of the Batmobiles featured in film and television-and detailed specs, blueprints, and historical comparisons, Batmobile: The Complete History is an informational and visual delight for automotive and Batman fans alike.”

Both books are being released by Insight Editions with a release date of June 26, 2012. The Dark Knight Rises is scheduled to be released in theaters on July 20, 2012.