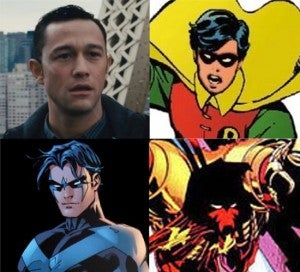 Before The Avengers was released in theaters, there was much speculation over who the mysterious aliens were. While we’re pretty sure there will be no aliens in The Dark Knight Rises, there is just as much speculation revolving around the mysterious John Blake. Speculation begin right after Joseph Gordon-Levitt was cast in the role, because no one believed that such an up-and-coming actor would be cast in what looked like a minor role. Here are our top five theories as to who Joseph Gordon-Levitt’s character John Blake really is in The Dark Knight Rises.

Robin – Even though this has been one of the most popular theories about John Blake, it is also one of the most unlikely. While Robin is perhaps the best known of Batman’s supporting characters to not have appeared so far in Christopher Nolan’s Batman franchise, his traditional green, red, yellow, and black costume would stand out like a sore thumb in the movie. Also, the appearance of Robin is often credited right alongside George Clooney as destroying the first Batman franchise. Would Warner Bros. really risk the curse of Robin again? Regardless of if Joseph Gordon-Levitt actually dons a costume, many have speculated that John Blake will basically serve as Robin to Batman even if he never officially takes the name.

Nightwing – While Robin’s costume would look pretty awful on the big screen, Nightwing’s costume would fit right into the dark and gritty world that Christopher Nolan has crafted. For the non-comic book readers that follow the Batman franchise, Nightwing is the superhero identity that the Dick Grayson took on after Robin. Nightwing does seem like a better fit for The Dark Knight Rises, but the character wouldn’t have the familiarity with the general public that Robin would. Of course, Christopher Nolan has shown he isn’t afraid to introduce lesser known characters, as he opted for Bane as the main villain over better known characters like The Riddler or The Penguin.

Azrael – There have been hints that The Dark Knight Rises is partially based on the Knightfall storyline in the Batman comic books. In the Knightfall storyline, a character called Azrael temporarily took over for Batman. There have been a number of unconfirmed rumors that have tied Joseph Gordon-Levitt’s name to Azrael. However, Azrael’s red and yellow costume would probably look as garish on the big screen as Robin’s costume would. Of course, Nolan could always have John Blake be Azrael in name only and forego the costume.

Replacement Batman – That John Blake will either temporarily fill-in for Batman while he is injured or replace Bruce Wayne as Batman at the end of the movie is one of the most popular theories going around. Of all the various theories, this one seems to make the most sense from a plot perspective. The Dark Knight Rises trailers have revealed Bruce Wayne walking with a cane, so we know he has suffered some type of injury. Some have even suggested that some images of Batman in the trailers look like it might be Joseph Gordon-Levitt in the costume rather than Christian Bale. Also, Christian Bale has said that he is done playing Batman after The Dark Knight Rises. By introducing Joseph Gordon-Levitt into the role, Warner Bros. could continue their Batman movies without having to do a hard reboot of the character.

So what do you think? Will Joseph Gordon-Levitt really be Robin, Nightwing, Azrael, a new Batman, or just plain old John Blake?