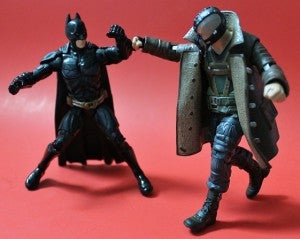 The first wave of Movie Masters toys for Christopher Nolan's upcoming third and final Batman film The Dark Knight Rises have appeared in stores, with MTV Geek getting an in-depth look at the ultra-articulated and accessory-rich action figure line.

The first wave includes Batman, Bane and Alfred, each with their Dark Knight Rises looks (although really, has Alfred changed much from movie to movie? I guess here he wears a suit more than a sweater-vest...), and MTV had some fun posing Batman and Bane in an iconic 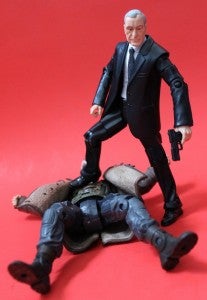 pose from the trailer and Alfred in what seems an unlikely position (as seen below), unless they know something about the film that the rest of us don't. And before you go shouting "The butler did it!", the article says they stole that gun from a Commissioner Gordon toy (not pictured).

Fans of the comics may remember that in Batman #497, the famed "breaking of the Bat" issue, Bane broke into Wayne Manor and knocked Alfred unconscious before Batman even got home. Alfred, though, has occasionally been depicted as quite a scrapper himself, and has been known to brandish firearms before, most recently in Chuck Dixon's fill-in arc on Booster Gold, where Alfred took a few pot shots at the titular hero and his sister, believing that they were a threat to the Batcave.

As has become the norm for many collectible action figure lines of late, fans who buy them will receive a piece of a larger collectible in each box. If you assemble the full line of toys, you can also assemble the extra piece. In this case? A fully-functional bat-signal.