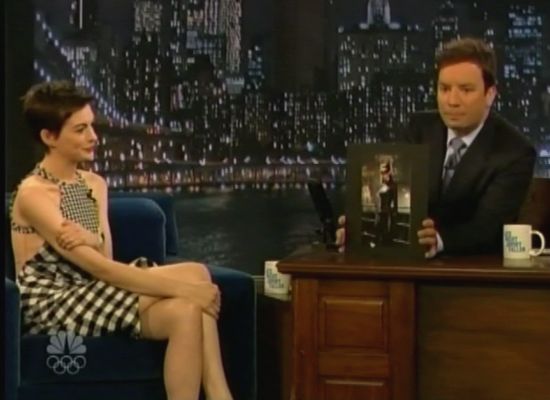 All this week, Comicbook.com has been bringing you Dark Knight Rises reviews from talk show hosts who have seen early previews of the movie. On Friday night’s Late Night With Jimmy Fallon, Anne Hathaway appeared to talk about her role in The Dark Knight Rises. After the furor over David Letterman possible spoiling the end of The Dark Knight Rises yesterday, it appears as if someone at Warner Bros. might have had a talk with Fallon to insure no spoilers were leaked.

Fallon said, “I saw the Dark Knight Rises. Wow! It is awesome. I think legally I’m not allowed to say anything about the movie.” Hathaway replied, “I wouldn’t recommend saying anything.” Fallon continued, “But I will say this. Batman is in the movie. Can I say that?”

Fallon added, “There’s so many fun things that I can talk to you about, but I can’t tell you. But there’s fun things in this movie. You’re like ‘What?!?’ And it’s good. You hit a homerun in this movie. Congratulations, you play Catwoman. I can say that.”

To prepare for the role, Hathaway said she did martial arts and went back to the comics. She also said she almost shared a cat with someone. Returning to talking about the secrecy of the movie, Fallon said, “You can say this. There’s trouble in Gotham City.” Hathaway replied, “There’s trouble in Gotham City. There’s a guy named Bruce Wayne. There’s a character named Batman. I play Selina Kyle, and...”  Fallon interrupted, “Watch it, you’ve said too much.” Hathaway finished, “And there’s a dude in it named Bane, who wears a mask.”

Fallon asked if Christopher Nolan was intimidating. Hathaway said, “The first few times I met him I couldn’t even really look him in the eye. I was so intimidated. But you spend some time on set, and you learn to like read how the days go. Because he’s not a very demonstrative person, so if you get a hug, it’s like amazing. And if he’s being quiet, you know it’s probably not a great day. And if he starts making jokes, you’re like ‘Oh my god, this day is so good.’ And if he starts quoting MacGruber, you’re just like this film will win an Oscar.”

Despite legally not being able to say anything, Fallon offered up one more quick review. Fallon said, “I almost got a headache just thinking about scheduling this movie or directing this movie. It’s just intense, action-packed. It’s like it’s just such a fun movie.”