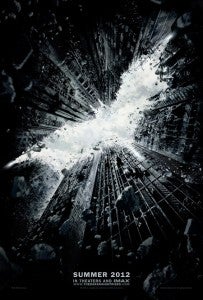 Yes, Warner Bros. studios continues to tease you more and more.  We've already seen leaked images of various shots, Anne Hathaway in a maybe Catwoman costume and much more, but now you will get to actually see a REAL part of the highly-anticipated third film in the current Batman franchise, The Dark Knight Rises, a few months before its 2012 debut.  However, there is a catch.  The film's few minutes will be shown at 70mm IMAX screens before the airing of Mission: Impossible-Ghost Protocol, another installment in the Tom Cruise-starring film series.   December 16th is the date for the release of Mission: Impossible, a few days before it hits release in general theaters.  It's a clever strategy, as the company did this for the last release, The Dark Knight, by attaching it to a guaranteed hit with the Will Smith as lead I Am Legend.  Whatever is revealed in those first six minutes will surely be rehashed, analyzed and salivated over, leading to next summer's release of the film in its entirety.

"The Dark Knight Rises" Sneak Peek to be in December