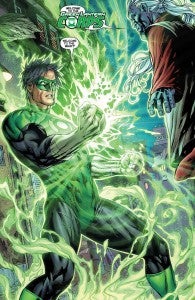 One of the things I've been wondering about with the new DC Universe: If everything has happened in just five years, how likely is it that Geoff Johns and company planned to retcon, or at least dramatically alter, Hal Jordan's years as the villain Parallax between 1994's Emerald Twilight and 2005's Green Lantern: Rebirth? With the promise that Batman and Green Lantern more or less kept their runs intact, it seemed unlikely.

Well, that may have changed a little. Newsarama previewed Green Lantern: New Guardians #1 by Tony Bedard, Tyler Kirkham and Batt yesterday and the first pages, a flashback to when Kyle Rayner got his ring, appear to suggest that he was never the sole Green Lantern. "Welcome to the Green Lantern Corps," Kyle is told by Ganthet, who then briefly explains the role of the Corps.

Of course, when Kyle was originally drafted into the Corps in the '90s, Hal had just gone crazy and killed many of them, then destroyed the Central Battery on Oa and left the remaining Corps members powerless. Kyle was adapted with the phrase "You shall have to do," and served as the sole Green Lantern for most of the next decade. Hal, meanwhile, bounced around as a villain, an antihero, and finally died as a hero as Parallax before returning from the dead to take up the mantle of The Spectre when Jim Corrigan, the original Spectre, finally moved on.

When Geoff Johns, now DC's Chief Creative Officer and one of the best-selling writers in the comics industry, came aboard as the writer of the relaunched Green Lantern title, his first order of business was to make Hal a Green Lantern again. Kyle has since been relegated to the status of supporting character, and Green Lantern: New Guardians #1 (out tomorrow) is the first time he's been the lead in his own ongoing series since. Many other "legacy heroes" of the '80s and '90s, such as former Flash Wally West, former Green Arrow Connor Hawke and founding Teen Titan Donna Troy, appear not to exist anymore in the new DC Universe.

The First Sign of a Green Lantern Continuity Tweak?