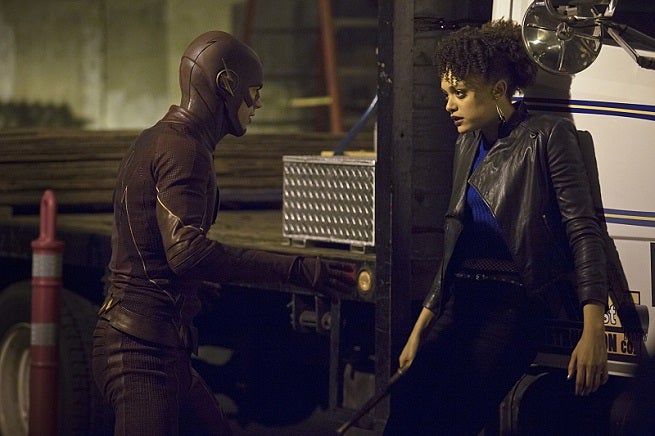 The CW has released a series of preview photos from next week's episode of The Flash, titled "Crazy For You."

The episode gives former Glee actor Grant Gustin a chance to sing a little, as he and Caitlin go to a karaoke bar and he ends up meeting Linda Park, a co-worker of Iris' at the Central City Picture News wit whom he hits it off.

From there? Check out the photos and synopsis below.

LOVE IS IN THE AIR -- Caitlin (Danielle Panabaker) decides that she and Barry (Grant Gustin) need to move on from Ronnie (guest star Robbie Amell) and Iris (Candice Patton) and find new loves so she takes him for a night out at the local karaoke bar. Caitlin doesn't have any luck making a love connection but Barry meets Linda Park (guest star Malese Jow), a sports reporter for the Central City Picture News, and asks her out on a date. When Barry tells Iris he has a date, Iris is surprised by her reaction. Meanwhile, Cisco (Carlos Ramon) considers Hartley's (guest star Andy Mientus) dangerous offer and the team searches for Shawna (guest star Britne Oldford), a meta-human with teleportation powers, who just busted her boyfriend Clay (guest star Micah Parker) out of Iron Heights. When Henry (guest star John Wesley Shipps) snoops around in an attempt to help Joe (Jesse L. Martin) and Barry solve the crime, he ends up in the infirmary after getting roughed up by inmates. Rob Hardy directed the episode written by Aaron Helbing & Todd Helbing (#112). Original airdate 2/3/2015.

The Flash: Crazy For You Photos Focus on Peek-A-Boo and Linda Park

Cult of the Lamb Review: An Unexpected Hit

The Lord of the Rings: The Rings of Power Introduces Pharazon of Numenor (Exclusive)