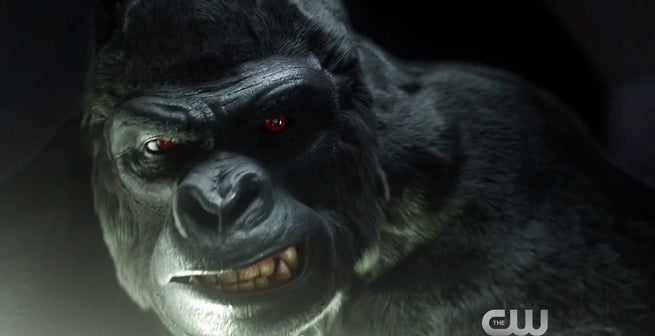 At the WonderCon panel for The CW's The Flash, producers revealed the titles to two upcoming episodes, one of which reveals when fans will finally get something that's long been teased.

Flash TV News was one of the venues liveblogging from the panel, and made the following revelations:

#TheFlash episode 20 is called "The Trap."

While "The Trap" is one of those titles that could mean a lot of things, "Grodd Lives" is pretty obviously the payoff for the season-long series of teases that Gorilla Grodd is coming to the hit series.

Grodd, a telepathic, superintelligent gorilla in the comics and part of a civilization of similarly-evolved apes, is instead a single gorilla apparently granted his abilities by the particle accelerator explosion on The Flash. His damaged cage was shown in the pilot and is one of a few things from the start of the series that producers said would be paid off in the  show's final episodes this season.

The Flash returns on April 14.

The Flash Episode 20 and 21 Titles Revealed at WonderCon