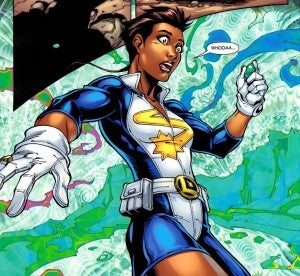 Fans who were upset that Barry Allen wasn't blond when he appeared on last night's episode of Arrow may be moving past that concern now that Grant Gustin has been met with generally good reviews. It probably won't last long; a report claiming to have inside information on casting for the Flash pilot is likely to ruffle the feathers of those who expect their comics to be adapted identically to the screen by recasting white reporter Iris West as a black psychology student. According to Bludhaven Banter, those casting sides shown by David Rapaport yesterday, which confirmed the presence of both Iris West and her detective father, have leaked online, and here's how they describe the characters: IRIS - 22-28 - African-American - As smart as she is beautiful, Iris is in grad school studying psychology. She's also Barry's mile a minute, fast-talking, quick-witted best friend. Her father, Detective West, took in Barry when his mother was murdered, and his father was wrongly accused and imprisoned for her murder. In a tough childhood for Barry, she was the one "not tough" thing. She's unaware of Barry's strong feelings for her. DETECTIVE WEST - Late 40s to Early 50s - African American -Detective West is an honest, blue-collar cop who's seen it all. A soulful, funny caring father to Iris, and a surrogate father to Barry, West came up through the foster system himself. He took in Barry after his mother's murder and his father's imprisonment. He believes in Barry and supports Barry's efforts to prove his father's innocence. The description of Iris as unaware of Barry's feelings for her might track with what producers have said about Barry and Felicity sharing the common bond of unrequited affection. In the comics, while the West family is white, Barry and Iris eventually have a granddaughter, XS (pictured above), who is African-American, has Barry's powers and is a member of the Legion of Super-Heroes in the 30th Century. Since most mainstream superhero comics were created before it was popular to have non-white protagonists, comics publishers have struggled to adapt to the 21st Century entertainment landscape, where movies and TV are generally expected to be more representative of real-world demographics. Solutions have run the gamut from featuring nonwhite characters who already exist to replacing dead characters with minority "legacy" heroes who will take on the established brand to simply recasting characters when they get to other media based on the needs of the project. Often, fans complain when changes are made, such as when Chronicle actor Michael B. Jordan was recently rumored to play Johnny Storm in the upcoming Fantastic Four remake. Some characters--usually headlining characters who will be featured on posters and merchandise--drive more anger than others; most fans didn't complain about Laurence Fishburne playing Perry White in Man of Steel, for instance, but the conversations surrounding rumors of Jordan's Fantastic Four role have been downright toxic. Adding to the discussion in the case of Iris West is the fact that her nephew Wally--who took over for Barry Allen as The Flash when he was presumed dead for about twenty years in the comics--still has a strong and vocal following who will likely object if he's changed almost as much as they will if he's not featured in a potential Flash TV show.

The Flash Pilot: Iris West is Black, Grew Up With Barry