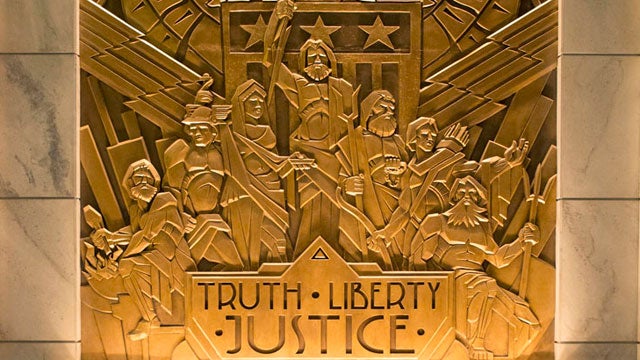 Since the pilot episode for The Flash aired, numerous fans have speculated that the bas-relief mural of seven Greco-Roman gods inscribed with the word "Justice" at the Central City Police Department was in fact a not-too-subtle reference to the Justice League.

We missed it the first time around, but made note of it in the second episode, particularly after a reader noted that the seven figures in the mural were too few: there were 12 gods who live on Olympus and only seven -- a common number for Justice League lineups -- on the mural.

Well, Entertainment Tonight caught up with head production designer Tyler Harron, who confirmed that the gods on the image are indeed meant to be Superman as Zeus (Jupiter), Batman as Hades (Pluto), Wonder Woman as Hera (Juno), the Flash as Hermes (Mercury), Green Arrow as Apollo, Aquaman as Poseidon (Neptune), and the Green Lantern as Hephaestus (Vulcan).

We'll resist the urge to ask whether the eagle at top could be Hawkman.

"I wanted to do a deco [themed] set and [the sculpting style of] bas-relief in the deco era was rampant and so was the Greek mythology in their sculptures," Harron explained. "So I said I'd like to put in an Easter egg that represents all each one of the Justice League members."