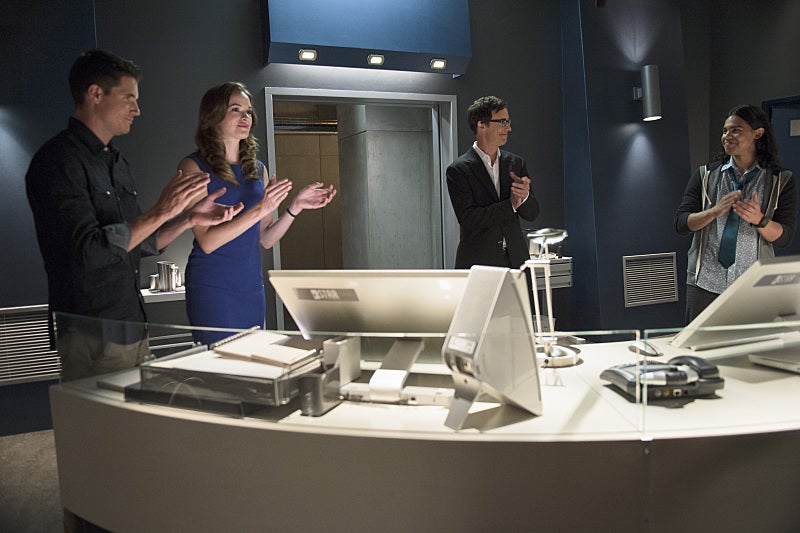 Airing in just under an hour, this week's episode of The Flash, titled "Things You Can't Outrun," is the best and smartest episode to date, and one of the best episodes of superhero TV I've ever seen.

Last week was, compared to the stellar pilot, not a great episode, seeming to fixate more on the procedural elements of the show and reveling in the direction of David Nutter, who could do the impossible and make Multiplex not seem absurd in motion.  It felt like a step back and while far from a bad episode of television, it didn't feel like it was fulfilling the promise of the pilot to be the most fun, smartest and best superhero show in an increasingly-crowded TV market. This week, it absolutely did.

While the central conflict revolves around a supervillain, as it has every week so far, they found a way to superimpose The Mist's backstory over that of Team Flash, giving almost every character a genuinely interesting and believable emotional arc.

Put simply, there was more character development in this episode than you'll see in a season of a lot of comic book shows, and they managed to include it without doing harm to the larger narrative or slowing down the action beats.

Particular praise should go to two members of the cast who have, until now, not really been singled out: Danielle Panabaker, who delivered an absolutely heartbreaking performance as Caitlin Snow, and John Wesley Shipp, who as Henry Allen found the perfect balance when sharing his first scene with Jesse L. Martin's character -- the man who put him in jail for life, but also always made sure Barry was taken care of. The level of performance Shipp put into a very small number of lines in the episode was pretty incredible.

Knowing what we do -- that Ronnie Raymond will return and, when he does so, will be largely robbed of his humanity -- means that a lot of this episode and especially of Panabaker's performance will be informing future stories. They managed that, too, without robbing this issue of anything or feeling like they were derailing anything to seed future stories. Writers Alison Schapker and Grainne Godfree deserve a lot of credit for pacing this episode in such a way that no beat felt wasted and no scene felt like it could have been done better.

The Flash Review: Tonight's Episode is The Best Yet