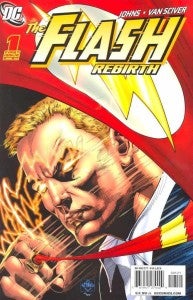 When Barry Allen comes to Starling City in the eighth episode of Arrow Season Two later this year, the soon-to-be Fastest Man Alive will do so in search of his mother's killer. The mystery of Nora Allen's murder is a fairly new element in the character's mythology--one introduced in Flash: Rebirth by Geoff Johns, who will co-write the episodes in which Barry/The Flash appears on Arrow. "I've got fresh intel on exactly what brings Central City PD CSI Barry Allen to Oliver's orbit," TVLine wrote earlier today. "The would-be speedster travels (not by foot, I assume) to Starling City while investigating a series of brutal slayings that he believes may have a connection to his mother's years-ago murder — a crime for which his father has been unjustly imprisoned." The death of his mother was a key story element in Johns's comic book miniseries Flashpoint, an adaptation of which titled Justice League: The Flashpoint Paradox was released on DVD, Blu-ray and digital download services this week. That was the first-ever feature-length film in which The Flash was the central character (even if they downplayed it a bit by using the Justice League branding). Casting has begun for Barry Allen and members of his supporting cast, who will reportedly appear in the third of three episode featuring the cop-turned-superhero. Barry is expected to play a role in episodes eight and nine before going away and returning in episode 20, which is being viewed as a backdoor pilot for The Flash. No word yet on which supporting characters from the comics might make the jump to the small screen.

The Flash TV Series Will Use Elements of Flash: Rebirth to Bring Barry to Arrow