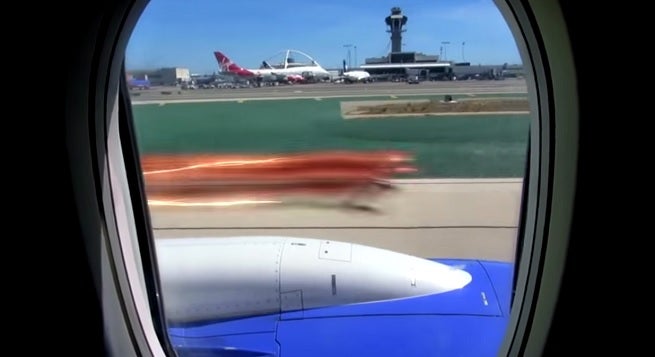 A new video has been released in support of The CW's The Flash which appears to be either a viral marketing video, or perhaps part of Iris's "The Streak Lives" blog.

In the video, embedded below, you can see a family preparing to take off in a commercial jet; the father is recording his kids' reactions as well as pointing the camera out the window to catch the ascent, when The Flash buzzes by, a red blur  that leaves people wondering what they just saw.

Again, it plays a bit like the kind of viral marketing thing that a movie studio would attach to a secretive new film project where the hero hadn't yet been unveiled. Since The Flash has been on TV for a month now, it seems likely this has an in-story component to it, which is why Iris's stalking of the proto-Flash seems a likely source for this video.

Also notable? That plane in the back is Virgin Air, not Ferris or some other DC Universe/made-up/generic brand. Is that a commercial tie-in, or did they just shoot this at the actual airport rather than a soundstage?