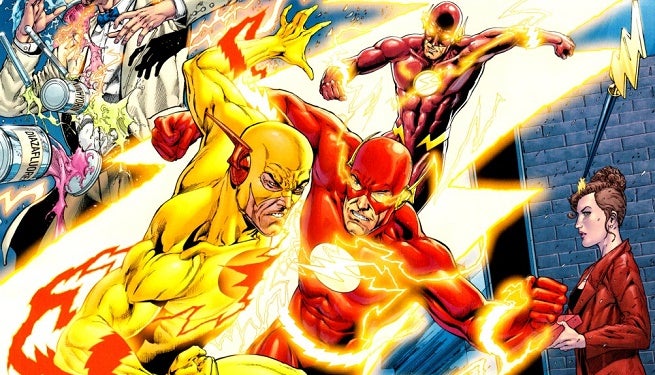 Tonight's episode of The Flash featured the first appearance of something comic book fans have been waiting for since October: The Speed Force.

What's the Speed Force, you ask? We're glad you did.

The Speed Force is an invisible, omnipresent field in the DC Universe. The energy field that grants all speedsters their power.

Several speedsters have merged with it, usually at the time of their deaths, including Barry Allen, Johnny Quick and Max Mercury.

The DC Wiki (where you can get a short history of stories pertaining to the Speed Force) notes that those with access to the Speed Force can use a large number of abilities, usually revolving around speed, including: Superhuman Speed, Superhuman Endurance, Increased Perceptions, Accelerated Healing, Decelerated Aging, Speed Force Aura, Supercharged Brain Activity, Vortex Creation, Phasing, Steal Speed, etc.

In the comics, one of the most Reverse Flashes have a direct connection to the Speed Force, but Hunter Zolomon -- the Reverse Flash many fans speculate will be the model for Harrison Wells -- does  not, instead having a "shifted relationship" with time which allows him to affect the appearance of super speed.

The Flash: What Is the Speed Force?