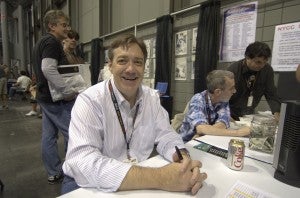 In the wake of a spate of cancellation announcements tonight from DC Comics, ComicBook.com reached out to writer/artist Dan Jurgens, whose The Fury of Firestorm the Nuclear Man was one of the titles on the chopping block. Jurgens's run on the series began with #13 in October and will conclude with May's #20, when the series ends. The series began its run as one of the lowest-selling and poorest-reviewed series of the New 52 and went through a number of writer changes before the entire original creative team finally left when Jurgens took over. Reviews for his issues have been solid, skewing toward good, but the series may have been unsalvageable before he came aboard. Said Jurgens in a statement:

"I always liked Firestorm a great deal and thought I could bring something to the book. Gerry Conway and Al Milgrom did a great job in terms of conceptualization, and that left plenty of room for later writers to explore the character's potential. "Everyone involved with the title gave it their very best, but the sad truth is that the sales were in pretty dismal shape when we started. That having been said, I think we restored a certain sense of fun to the book and we still have plenty of surprises coming before we take our final bows. I'm glad I got the chance to work on a character that sort of falls right into my wheelhouse, and appreciate the fact that I got to do it my way with very little interference and lots of support. "And, more than anything, we hope to position Firestorm in a very solid story with lots of potential."

Jurgens does a standing monthly "commentary track"-style interview that examines Firestorm the week it comes out; our next installment will come February 27, and covers The Fury of Firestorm the Nuclear Man #17, guest-starring the Teen Titans.