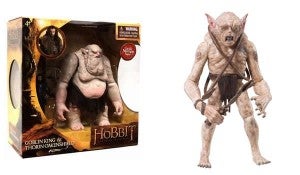 According to our enthusiastic toy consumer who chimed in yesterday about Tauriel and The Great Goblin, there are two factions of orcs appearing in December's The Hobbit: An Unexpected Journey, according to the action figures currently on sale at Toys R Us.

There will be apparently two different sets of Orcs in the film: The Misty Mountain Goblin Orcs (led by The Great Goblin) and the Orcs under Azog.

The Grinnah figure is a slaver-driver type orc that works for the Great Goblin and is the one that leads Thorin and company to the Great Goblin. he uses a whip and it is said that he secretly hates the great Goblin but does what his master commands

The most interesting thing is that it isn't the Great Goblin that sends the wargs after Thorin and co but Azog. They are led by Fimbul.

Azog's orcs will look like what we have come to expect of Orcs.

A bit of research reveals that Azog, in the books, was the leader of the Moria orcs and was killed by the dwarf Dain.

That's probably the last of it--and again, much of this is in the books and well-known to most anyway, but having it out there on licensed toys lets us know not only what's being kept and not, but also what stuff will appear in the first movie as opposed to being put off for a bigger payoff in a later film.
Start the Conversation