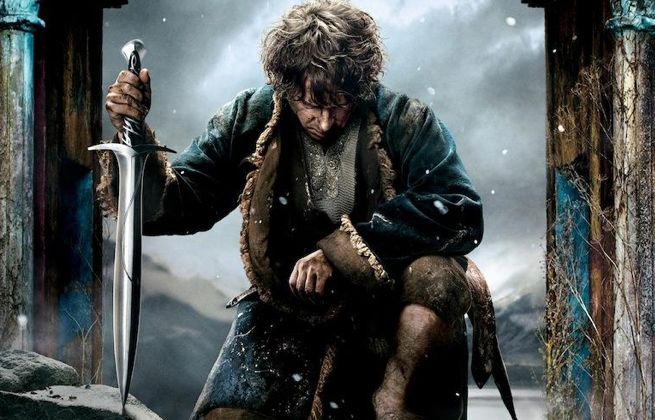 The new Hobbit film opens with the climactic attack of Smaug upon the city of Laketown that its predecessor denied audiences. This sequence, while far from perfect, is exciting and dynamic. Jackson clearly reestablishes the stakes of the fight and reintroduces the men and women of Laketown as both heroes and villains. There is momentum to the action and it is easy to root for Bard and against the fleeing Master of Laketown. Smaug is a spectacle that rivals anything found in the Lord of the Rings trilogy, emanating immense power from the screen. The final moments of Smaug's assault are absolutely thrilling.

Smaug's attack upon Laketown is the closest that Peter Jackson has come throughout the Hobbit trilogy of films to capturing the grandeur and power of the battles in the Lord of the Rings. It is also the only time that The Hobbit: The Battle of the Five Armies ever feels exciting. After Smaug is defeated, the movie becomes a slog jumping across its bloated cast and landscape until arriving at the titular battle, which packs none of the same excitement or impact found at the beginning of the film.

All of the clarity and momentum of the opening sequence is lost the moment Smaug is killed. Jackson, by adding so many characters and subplots to Tolkein's novel, has created a story without any focus or drive. The entire middle section of the movie is composed of jumps across Middle Earth to check in with every character and force in play. Rather than building tension and foreshadowing the horrors of war, each scene feels like Jackson is checking off a series of boxes.

All of these scenes have the potential to be exciting, but they lack any real focus, much like the film itself. Every box being checked off is in the service of the more than hour long final battle rather than characters or drama. It becomes increasingly frustrating how little Jackson appears to care about the people populating his film. It's not even clear who the main character of this movie is.

It's certainly not Bilbo. He is only on screen enough to mark him as a supporting role and his stakes in this massive battle are so limited as to beggar believability. It may be Thorin. He drives the action for much of the film, but his motives and actions are driven by the needs of the plot rather than anything that feels real or provides an opportunity for emotional resonance. If can't be the party of dwarves as an ensemble cast since most of them are barely given distinctive personalities or needs. They are a potpourri of men with strange beards and battle axes with only a couple of exceptions. Most of the heroes in this story are given just as much screen time as Alfred, a one note joke of a character who serves literally no purpose within the film. The only characters in the film who feel as if they have any depth or needs not driven by plot (Kili, Tauriel, and Bard) are clearly part of the supporting cast.

All of these characters are left to simply take the next necessary steps in order to make the battle of five armies occur. It is an absolute slog to the climax of the movie, which composes about half of the running time. Unfortunately, that epic climax is no more exciting than the scattered, listless scenes that build to it.

The battle of the five armies is a perfect example of dramatic form overriding function. Gandalf briefly explains that Erebor is important to maintaining peace in the land, but it seems like an after thought. The reason why these five armies are converging is clear: to allow for an overlong feast of CGI and pointless chaos. It leaves viewers to wonder: Why does this matter? Who are all of these people? Why won't it end?

In The Lord of the Rings, Jackson masterfully told long-form battles by breaking them into smaller chapters. The battle at Helm's Deep is still the highlight of his entire career for many fans. There was a natural succession of events, a back-and-forth between the two sides that told an epic tale that still managed to be driven by its characters. Jackson created a clear sense of geography and built tension around each factions strengths and weaknesses, their desires and fears. He carefully edited the scenes to splice the grandstanding of battle with small character moments and natural bits of exposition. None of that is present here. It resembles a massive collection of warhammer figurines being smashed together until one side is declared the winner through the use of a deus ex machina that literally descends from the sky.

Amidst the chaos there are some great moments. A pair of deaths are stunning due to both their inevitability and the onlooking of characters who care deeply for them. Thorin's final battle with Azog appears to end in a genuinely clever turn that stands out as one of the best pieces of writing in the entire film. It is then reversed less than a minute later and the fight ends in a predictable, anti-climactic manner.

All of these small moments that glimmer like diamonds in a coal field are overwhelmed by the cheap, dirty rocks that surround them. Jackson provides no sense of pacing to the battle moving everything along as quickly as possible. There are no opportunities to build and release tension or to allow the smaller dramas within the larger scope to breathe. It is a grind that becomes exhausting within twenty minutes, boring within forty, and sleep inducing by the end of the hour.

The only relationships in this movie that seem to contain any genuine emotion are between Kili (Aidan Turner) and Tauriel (Evangeline Lilly), and Bard (Luke Evans) and his children. When these pairs are interacting, their performances are based on something that feels real. Kili and Tauriel's starcrossed love story is an added subplot that plays upon one of the oldest tropes in fiction. While it may seem unnecessary, it manages to provide some actual gravitas and drama to the lifeless second half of the movie. Evans performance as the constantly exhausted every man Bard is outstanding. At times he appears to be the only sane and relatable character in the entire film, simply trying to do the right thing for his family and people. A film told primarily from his perspective might have felt slightly less cold.

The central relationship between Martin Freeman as Bilbo Baggins and Richard Armitage as Thorin Oakenshield becomes an unintentionally funny aspect of the film. It appears as though the two actors are in entirely separate movies that have been spliced together. Freeman plays Bilbo with a consistent look of happy-go-lucky befuddlement. Even in the tensest scenes of the film, it appears as if Freeman may have just discovered he won ten dollars on a scratch lotto ticket. Armitage provides a Shakespearean performance playing to King Lear in an intense, loud manner. No matter how hard Thorin rages at the world as he descends into madness, Bilbo is incapable of responding with much of anything beyond a dopey grin.

For whatever flaws might be found in the central cast, none come close to the inclusion of Orlando Bloom as Legolas. Bloom has managed to become an even less capable actor in the twelve years since The Lord of the Rings ended. It feels as if he is reading directly from the script, making his already unnecessary presence all the more grating. Jackson attempts to recreate his stunts from the previous trilogy in sequences that appear shockingly bad in 48 frames per second. He is only part of one of the film's greatest sins, paying service to Jackson's original trilogy through overwrought winks and nudges. The inclusion of flickering Ring Wraiths was already gratuitous, but Legolas' final scene is so hamfisted that it caused people in the theater to break out in laughter.

The Hobbit: The Battle of the Five Armies is an unnecessary film. After the first twenty minutes delivers the conclusion to Desolation of Smaug, everything else feels unnecessary. It is an inversion of Jackson's Return of the King. While both are long films filled with characters, subplots, and epic battles, one is an exciting tale that feels like an important and meaningful conclusion, the other will put you to sleep.

The Hobbit: The Battle of the Five Armies is a Sleep Inducing Slog