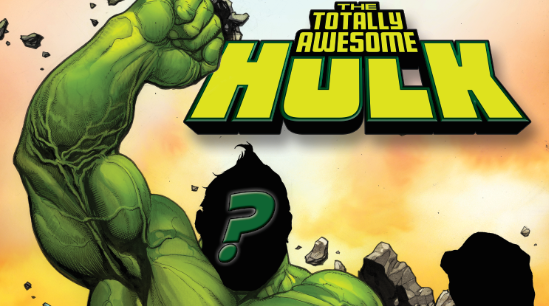 Though the Hulk is all smiles following Secret Wars, it's no joke. Marvel Comics will launch The Totally Awesome Hulk #1 this fall, from writer Greg Pak and illustrator Frank Cho. In the brand new series, the Marvel Universe will find itself with a jolly jade giant who isn't Bruce Banner. And while this all-new Hulk loves being a gamma-irradiated juggernaut, the rest of Marvel's heroes are less than thrilled.

Who is this Totally Awesome Hulk? According to Pak, readers will find out right in the first issue--but the mysteries won't end there. Below, Pak and Cho chatted with ComicBook.com about Totally Awesome Hulk's potential identity, what's going on with Bruce Banner, and what makes The Hulk totally awesome.

What makes this Hulk "Totally Awesome?" How will this title play into the story's mission statement and goal? Also--I have to know who came up with that title.

GREG: I think our editor, Mark Paniccia, got a page of Frank Cho’s incredible art, yelled “TOTALLY AWESOME,” and that was it.

The title’s packed with hyperbole and hubris, which is pretty darn appropriate when you find out who this new Hulk actually is. I can say no more. Maybe I’ve already said too much! Mark, stop kicking me!

Greg, what's it like to return to the Hulk almost four years after your extended run on the character? What convinced you that you had more Hulk stories to tell?

GREG: I had a tremendous time writing Hulk stories for 5 1/2 years. My editor, Mark Paniccia, gave me a huge canvas to tell an enormous story about love, anger, and family, and we were able to build to a huge, thematically resonant ending. So while I’ve had a few more Hulk stories running around in my head from time to time, I wasn't pining to get back on the book. We did what we set out to do, and it was glorious.

But then a few months ago I got a call from Mark, who said three magic words that I can’t reveal here, and my head exploded. And here I am writing the Hulk again. But it's an all-new Hulk with a very different new background and motivations, which is opening up crazy new stories and themes that I'd never imagined before. It's totally in the grand tradition of the Hulk stories I've loved and contributed to for years. But it's also entirely new. This is a huge opportunity and one of those gigs that I simply could not say no to.

Cool. Without going into spoilers, what will make this Hulk different from the pre-Secret Wars Hulk--other than being Totally Awesome?

GREG: The new Hulk absolutely loves being the Hulk. And that might create monumental problems for him and all the heroes and villains he comes into contact with.

Frank, what are you enjoying the most on your latest tour with The Hulk? Are you approaching the character any differently from before? If so, how?

FRANK: This project caught me off guard. When Marvel offered me the Hulk project, I naturally assumed, with my background in strong beautiful women, a new She-Hulk book. I was surprised when Axel told me it was the Hulk book, and he wanted me to partner with Greg Pak to completely rebuild the Hulk from the ground up. It was a no-brainer. I've always admired Greg's writing and loved his stellar run on Planet Hulk. The thing that will separate our Hulk from the rest is the humor. From the start, Greg and I wanted to tell a high action adventure with lots of Kirby monsters and humor.

FRANK: Greg is absolutely fantastic to work with. Not only is he a brilliant storyteller with big and clever ideas, he's flexible and comfortable enough for me to inject my ideas into the mix. And the most importantly, Greg completely understands the comic book medium and gives me room to draw big fun action.

GREG: Frank is a legend and one of the very best in the business. He can do it all -- big action, subtle emotional moments, huge slapstick and quiet deadpan humor. I've wanted to work with him for years and I'm thrilled we're teaming up on this book in particular. Big adventure, big laughs, and big emotion. He's got it all!

I've also had a blast talking with Frank about the characters and action and themes and everything else. I think I always work best when I have great creative partners to bounce things off of and build with. It's been great working Mark and Axel while developing the story -- and absolutely thrilling to see where Frank's taking it all. I've always got Frank's art in my mind as I write. I guess you could say I'm catering to his strengths. But, it actually feels more like his incredible strengths give me the freedom to go anywhere. I know he's going to nail whatever subtle or big emotion I throw at him -- and of course knock all the action way the hell out of the park. And Sonia Oback's colors are the icing on the cake -- just glorious, taking Frank's energy, humor, and power to the next level.

How will The Totally Awesome Hulk factor into the All New, All Different Marvel? Will this new Hulk's adventures carry a lot of sway in the Marvel Universe, or will he operate in his own little corner?

FRANK: The way the story is unfolding, Greg is doing a great job of allowing both to happen. I'm amazed at how Greg is weaving a story that stands on its own feet while tying it into the overall Marvel Universe.

GREG: The book will be entirely accessible to brand new readers and to folks who are reading only this book. At the same time, it will indeed be tied into the fabric of the ongoing Marvel Universe and will set some things in motion that will have pretty huge reverberations for many characters.

All right, look, I'm just gonna say it. It'll be the most important book in the Marvel Universe. Buy ten copies. No wait, buy a hundred. Buy one thousand.

Who are you most excited to see Totally Awesome Hulk interact with? Will these characters help illuminate things about the new Hulk?

FRANK: I don't want to give too much away but two of my favorite characters, She-Hulk and Spider-Man, drop in for a spell in the opening story.

GREG: There’s also a very important character who’s been mentioned in previous stories but who’s never actually been seen in a Marvel comic who makes her first appearance in our first issue. She’s our key supporting character and I love everything about her dynamic with the new Hulk.

And there's an incredible villainess that we're introducing here for the very first time.

How much will the Hulk's mysterious identity factor into The Totally Awesome Hulk? Will that mystery fuel a lot of the story?

FRANK: Far as I know, there is no mystery. We tell who the new Hulk is, how he became the new Hulk and hit the floor running. Literally.

GREG: Like Frank says, there will be no mystery about the Hulk’s identity once the book hits — you’ll find out who the new Hulk is on page one. And it will indeed be totally awesome, and it will fuel everything that happens in the story.

But there will be a big mystery regarding exactly what happened to Bruce Banner. I love that guy and wrote stories about him for years, and we’ve got some pretty huge revelations about him coming down the pike.

Since Hulk is pretty good at one word sentences, how would each of you describe Totally Awesome Hulk in one word?

GREG: This Hulk actually's got a pretty big mouth on him. So he probably wouldn’t limit himself to a single word. But I’ll go with an oldie but a goodie: INCREDIBLE. Because that beloved adjective is going to be entirely relevant: You won’t believe what we’re doing here.

FRANK: In a word- "Extraordinary". Axel Alonso and Mark Paniccia did an extraordinary job of gathering extraordinary talents together for this project. Now I think about it, "The Extraordinary Hulk" has a nice ring to it.

Greg, what's the current scope of your Hulk run? Are you planning on sticking around for an arc or two, or are you planning for another extended visit, like your last run?

GREG: I'd love to stick around a long time with this one. But that's really up to our dear readers. The more you buy, the more I can write, so please do place those pre-orders with your local shops!