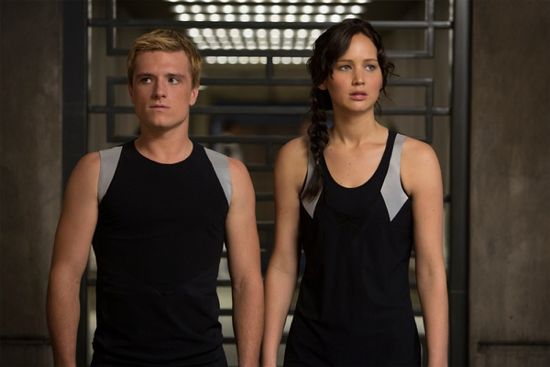 At the end of The Hunger Games: Catching Fire, Katniss and Johanna are rolling a wire attached to a tree that lightning is going to strike down to the beach in order to electrocute some of the other tributes. When Johanna and Katniss are suddenly ambushed, Johanna knocks Katniss out from behind. Johanna cuts open Katniss arm to remove her tracker. Then, Johanna runs away to draw the other tributes away.

Katniss gets up and returns to the tree, where she finds Beetee knocked out. When Finnick returns, Katniss initially points her arrow at him. Katniss doesn’t know if she can trust Finnick, and she’s confused as to where Peeta is. However, after Finnick reminds Katniss that he’s not the real enemy, Katniss realizes what she must do.

Katniss shoots an arrow wrapped in the wire at the forcefield as lightning strikes the tree, which causes the forcefield to break. Katniss is temporarily paralyzed by the shock, and as she lays motionless on the ground, a hovercraft drops down a basket to pick her up.

When Katniss awakens later in the hovercraft, she hears voices, grabs a syringe as a weapon and goes to investigate. She discovers Finnick, Haymitch Abernathy, and game designer Plutarch Heavensbee (who in a twist is revealed to be on the side of the rebellion). It turns out that the plan all along had been to get Katniss out safely, as she is a source of inspiration to the rebellion. Several of the other tributes were in on the plan. However, Katniss isn’t pleased to learn that Peeta has been captured by the Capitol.

As Katniss feels betrayed that Peeta was allowed to be captured, she gets upset and attacks Haymitch, but Plutarch sedates her. When Katniss awakens, Gale is beside her. Katniss asks about her mother and Prim, and Gale says they are safe that he got them out in time. Katniss is confused by what Gale means by getting them out in time, and Gale explains that District 12 was firebombed out of existence. The film ends with a closeup of Katniss’ face.