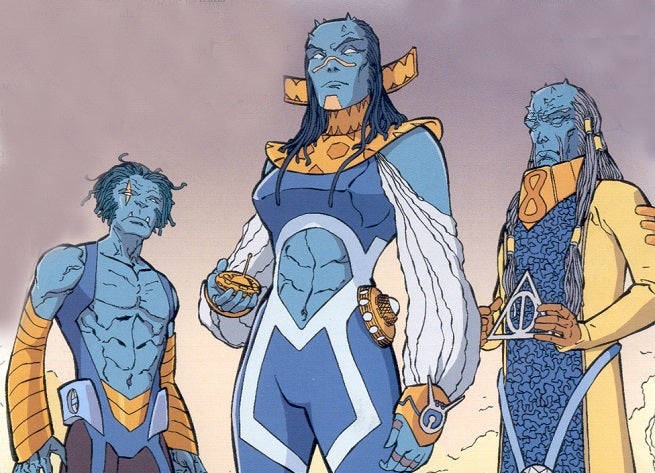 The Kree are so hot right now, you guys. Not only comics, they've spread to movies and TV and, I'm pretty sure there's a soon-to-be-released album called "Kree-p On Truckin': Invasion of Rock" from Kree artist Hep-Kor. But who are these (often) blue-skinned cosmic dudes? Where do they come from? What do they want? Join us now as we go Behind The Music on the Kree.

Originally showing up in Fantastic Four #65, the Kree were the Marvel answer to the Skrulls. Why the Skrulls needed an answer, we're not sure, but they did and so in their infinite wisdom, this is what we got. In the comics they look like humans, though some have blue skin.

Coming from the planet Hala (Hala back y'all!) the Kree started off blue skinned, and then slowly some pink skinned Kree came along and eventually made the blue skins a minority. Blue and pink skinned Kree tend toward fairly screwy levels of racism toward each other, in that subtle and calm way of comics from the 70s.

The Kree themselves spent much of their history ruled over by a being called The Supreme Intelligence, once again showing how unbombastic the Kree were. The Supreme Intelligence himself was a large green lump with tiny tentacles that they kept in a giant space jar. This, to the Kree, made sense. The Supreme Intelligence, or Supremor to his buds, was created so the Kree could get themselves a cosmic cube. He's made up of the greatest minds of the Kree and was smart enough to tell the Kree "Nope, no big cosmic gun for you guys," proving he was kinda smart after all. The Kree kept him on the payroll anyway, because Supremor had no other marketable skills outside of being supreme and intelligent. The Kree went on.

See, they hate the Skrulls. Not a small dislike, they truly think the Skrulls need to be wiped out. The Skrulls feel the same about the Kree, though they never built themselves a giant brain in a jar. Anyway, the Kree and Skrull fought for thousands of years - not mattering until eventually this spilled over onto Earth, because of course it did.

Now at first, way before humanity got busy messing up the planet,. the Kree came by and tried some experiments on people. This led to two races: The Inhumans and the Deviants. We'll get back to them. The War raged on and left Earth, though it would come back and get silly.

The Kree-Skrull War (note who gets top billing) came back to Earth millennia later and involved the Avengers becoming a big deal again as it might decide who ruled the galaxy, and then came after Earth. The Avengers decided they would deal with this once and for all and, in a strange turn of events, The Supreme Intelligence unlocked cosmic level power in Rick Jones so Rick could stop everyone and let Supremor stop the war. Yup. That happened.

Yo, guys, you just got collectively curbstomped by Rick Jones, a dude so dumb as to play harmonica while gamma tests were going on, and causing the Hulk. Both sides feel dumb over this to this day.

Also, it should be noted that the Skrull, in their first appearance, were turned into cows by the Fantastic Four and hypnotized into thinking they were just cows. So the Kree, who had never thought of this, kept fighting the Skrulls and… guys when your ages long enemy can be defeated by becoming cows I have to question your military superiority, here.

Moving on. Ronan the Accuser kept taking power from Supremor and then Supremor would get it back and so on. With Supremor on top (and a thousand fanfic were born that day), and the Kree-Skrull War ended at last, what were the Kree to do?

Get into a war with the Shi'ar, a race of people with bird feathers for hair and an absolute love of apostrophes. The war itself wasn't the Kree's fault, but they happily fought, being a race of military guys who just wanted to do military things. Really, the Kree loved the military. A lot. Unhealthily so, to be honest. But the Kree had also not discovered heavy metal so they didn't have another good outlet available to them.

Later, in another war (because that is what the Kree do, they go to war) Ronan took over once Supremor got all dead, and they fought Annihilus and mostly got a lot of dead Kree for their problems and then Ultron came out and was all "Puny meatsacks, I can take over the galaxy now that someone else softened stuff up" and well - the Kree fight a lot of wars.

1 - Gave us a great hero by the name of Mar-Vell, who eventually ended up in a body-swap deal with Rick Jones - proving that the Kree like Rick Jones more than anyone on Earth does.

2 - Accidently blew up a Psyche-Magnetron to give Carol Danvers her powers so she could become Ms. Marvel and later Captain Marvel, which really, thanks Kree, we like her a lot! So good on you there, Kree dudes.

3 - Created the Inhumans by experimenting on humans. That was mentioned but let's dig a bit into it. First of all, Kree, we don't come to your place of work and experiment with your genetics, so what's the deal? Secondly, creating a race of humans with super powers so they could eventually lead you in a war and then ignoring and forgetting them was not bright. I mean they left the Inhumans there because of a prophecy that said the Inhumans would destroy the Supreme Intelligence. Which… no, guys, you don't see the grenade and leave it, you get rid of it. The Kree just really have problems. But the Inhumans rocked out and deserve their own history article. So let's move on a bit.

4 - No that was about it. Otherwise the Kree fought in more wars like the War of Kings and the Realm of Kings and I think the Kings of Leon.

But as the Marvel Cinematic Universe grows the Kree have come along for the ride. In Guardians of the Galaxy the Kree represented by Ronan, who is shown to be a religious zealot. Not the best foot forward, guys. Then again, they haven't shown us Supremor yet. Here's hoping. We actually haven't seen Kree culture outside of Ronan's religious stuff, so there's a lot left to be discovered. Over in Agents of S.H.I.E.L.D. though we're starting to see some of their work. There's a long dead Kree who has a "Diviner" which is really a big fancy key to let people into what looks to be the Inhuman city of Attilan. Going there may answer more Kree questions, raise a bunch of other ones and introduce the Inhumans properly.

So there is a lot of ground for the MCU to cover, depending on how they want to proceed. Personally I am hoping for a Rick Jones and Supremor road trip movie.

The Kree: A Short History