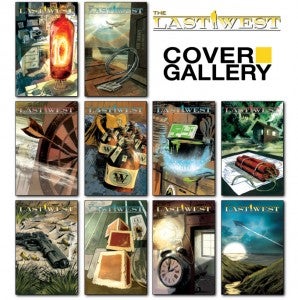 , a new graphic novel from The Forgotten's Evan Young and co-creator Lou Iovino that ComicBook.com reported on last week, announced earlier this week that they had found a new publisher--Alterna Comics--for the series and will announce today that they've suspended the Kickstarter campaign that would have funded production of the project.

The creators say they will be providing PDFs of the two already-completed issues to those who pledged in the Kickstarter campaign.

When Young and Iovino announced the relationship with Alterna a few days ago, they clarified that they would continue the Kickstarter campaign, since Alterna (being a publisher of creator-owned content) doesn't foot the bill for production and distribution, only providing a framework for the publication and soliciting content with Diamond.

"Alterna is an independent, creator-owned publisher.They would still ask us, the creators, to shoulder the financial burden of creating a comic - no different from a company like Image, for example," Young explained on the Kickstarter page. "So we still need to hit our goal, and the funding that our backers are providing is not footing a bill that Alterna would otherwise be paying for.

"The money from our backers is still going toward the same exact goal: getting the project complete and giving our art team the chance and support they need to make it happen. It covers the pencils and inks, the coloring, and the lettering - all of which takes a ton of real time for our artists, and therefore has costs. "

As soon as Alterna became involved, though, backers wondered what it meant for a potential print edition, and started wanting to alter their support levels to indicate print versus digital. It quickly became too many people asking too many questions for which the answer was "We don't know yet."

"We were flooded with questions about our print strategy," Young told ComicBook.com. Ultimately, Young said, this is good news for their project, and for fans and backers, but the need to make so many changes in the short time before time ran out on the campaign just wasn't plausible.

"Backers and others alike really want both digital and print, but unfortunately we didn't design our current campaign around that. So we've decided to suspend our current Kickstarter, retool our entire publication approach and then relaunch a new campaign. We need better and more appropriately priced print rewards,  we need to re-time our issues from bimonthly to monthly, etc etc... all things that can't be done mid-stream on Kickstarter because they just don't allow it."

The Last West Gets a Print Publisher, Suspends Their Kickstarter