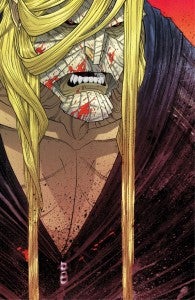 Image Comics has announced that a new Luther Strode mini-series will be launching. The previous Image Comics mini-series called The Strange Talent Of Luther Strode ended in a baptism of blood as former geeky weakling Luther Strode discovered the depths of the powers he developed with "The Hercules Method" of strengthening. Creators Justin Jordan and Tradd Moore will both be returning for The Legend Of Luther Strode, which is set five years after Strange Talent. According to Image Comics, "Luther has systematically been taking out bad guys, and those left have a plan to put an end to the seemingly invulnerable vigilante. The development means the violence in Legend is amped up even higher than the not-inconsiderable level of gore in Strange Talent." "While the hyper-violence and how we're desensitized to violence in comics was one of the points of the first one, we had to be careful not to, you know, desensitize people to the ridiculous violence," explained writer Justin Jordan. Atrist Tradd Moore said, "Within the first two issues there have already been about 12-15 dudes eviscerated in some ridiculous and fantastic fashion. And that's not including any off panel maiming! Manhole cover decapitation, exploding heads, hearts ripped out, body severing karate chops. I tell you, we've got it all. " The first issue of The Legend Of Luther Strode will arrive in comic book stores on December 5, 2012.

The Legend Of Luther Strode Mini-Series Announced By Image Comics