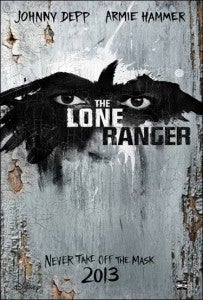 It's probably no surprise to anyone who's paying attention that the first trailer for The Lone Ranger, which debuted last night on The Tonight Show, features Johnny Depp's Native American guide Tonto pretty heavily.

The nominal star of the film, Armie Hammer, hasn't had nearly the promotion from Disney since the movie began, and it seems Pirates of the Caribbean director Gore Verbinski has moved past all pretense of centering the film around anyone else in favor of embracing the way Depp's over-the-top performances tend to steal the show.

All that said, the new trailer is nearly a minute and a half long and also features quite a bit of exposition and a number of shots that explain the importance of that train that they had to build from scratch--an expense which was something of a bone of contention with Walt Disney Pictures,w ho are the ones producing and distributing the movie.