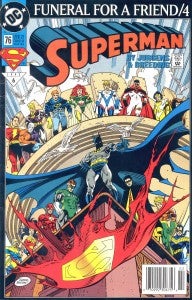 I realize this is a little late, but as readers might know it's a bit hard to break away during Christmas. To listeners of my Panel Discussions podcast (returning in 2012!), it's pretty well-known that the 1992 Death of Superman story was instrumental in bringing me back to comics as a teenager after a brief absence. What's really never been discussed is the extent to which the Christmas spirit played a role in retaining me as a reader. As is well known, as a non-reader I was part of that large population of folks who had no real use for Superman. As many teenagers are these days, I was incapable at the time of connecting with Superman, the brightly-colored avatar of hope and justice and all things bright and shiny and wonderful. I didn't much care for Batman,either, but if I had to choose between the two, at least Batman wore black (in the Tim Burton movies). I would go one step further than that, though; I actively disliked the character (although I can't remember why), to the extent that when I saw on the local news that DC Comics planned to kill him, I set out to get my hands on the Doomsday! story, just to "see the son of a bitch die." And, for the most part, I did. My father owned a grocery store so even on short notice I was able to obtain most of the issues playing into the Death of Superman story. While I had assumed that I would wander off, I found myself picking up Funeral For a Friend as well, the follow-up that dealt with "A world without a Superman!" as the tops of the books trumpeted to anyone passing by the newsstand. I've long told listeners to the show and fellow fans that it was Superman's supporting cast that won me over, aided by the capable writing of people like Roger Stern,Louise Simonson and Dan Jurgens. If I'm honest, and I've never gone this far in the story before, it was an issue of Dan's that did it. "Metropolis Mailbag II", from Superman #76, saw other superheroes picking up the slack from something that Superman would do every Christmas--spend the day answering pleas for help from people whose letters (addressed only to "Superman") ended up in the dead letter file at the Metropolis Post Office throughout the year. The first "Metropolis Mailbag" had been a nice little story following the Man of Steel through one snowy night, which as a non-reader I had never encountered.

The second dealt with, among other things, a young man named Mitch Anderson, whose home had been wrecked during the Justice League's melee with Doomsday. Written by Jurgens as a cynical teenager who idolized Guy Gardner and didn't see the value in Superman, Mitch's tune changed when the shattered League lay unconscious around him and Superman surrendered the upper hand in his fight with Doomsday to return to the burning house and save the Anderson family. As a character, Mitch had grown a lot in the days between when Superman fell and when the second Mailbag happened, as his visit to Superman's tomb indicated. His story was doubly touching because while he struggled with guilt and sorrow in Metropolis with Jimmy Olsen, the Justice League was helping to rebuild his home back in Ohio and reunite his estranged father with the loved ones he almost lost. Years later, the character would be recycled as a one-note super-wannabe who founded the Supermen of America, but for this one month, the depth and emotion with which he and the other characters were handled helped to tell not only a great Christmas story, but a story that answered that recurring question, "Why do we still need Superman?". In a single issue, I was sold and for months I had gone from not reading any comics, and hating Superman, to reading his title religiously in spite of a glaring lack of any Superman in it. I remained with those titles as long as Jurgens and Simonson did, which was a pretty long time. Jurgens has told myself and other interviewers that he's going to steer clear of doing anything he's done before in taking on Superman and Justice League International for the New 52. That's a shame, because I'll miss the "Metropolis Mailbag" concept.

The Meaning of Superman: A Christmas Story