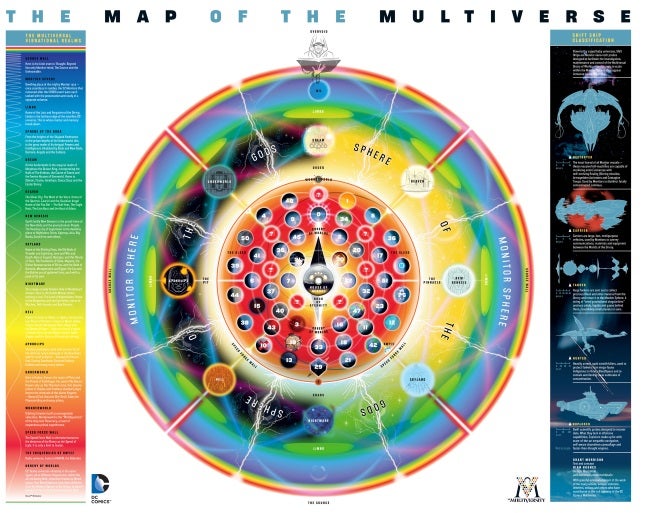 The first issue of Grant Morrison's Multiversity hit the stands today and -- woo! Quite a book. We talked about it a little bit here, but that's opinion. What I want to get into here is a little bit of trivia.

Before we get started, DC's All Access YouTube show provided us with a four-minute look at "Easter Eggs" from the issue -- but they weren't actually from the issue. Rather, they were from the promotional map of the Multiverse provided at Comic Con and then posted online ahead of the release of today's debut. You can see the poster above and the video (which, in spite of being somewhat misnamed is in fact a valuable resource) below.

A lot of the physical elements of the world, including settings, vehicles and the like, are explained in the video below and we won't go into them here, since there's plenty else to talk about.

While everybody likes monkeys and there are God knows how many monkeys, apes and gorillas in superhero comics, it seems as though Stubbs is new. I don't see any record of him on the DC Wiki, anyway, which is my go-to resource for the characters I can't remember myself.  So...new characters. Yay!

Anyway, one major thematic thing that's been clear from the word go: comics are once again a metatext here, with Morrison allowing his characters to have much more genre savvy than is normal. A number of the characters have read Superman, Red Racer is a fan of virtually every other character in the book, and Nix Uotan reads a comic-within-the-comic that helps guide the mission.

This is a theme that's been used any number of times for Morrison, most notably in Animal Man, Final Crisis and All-Star Superman. He also originated "Comic Book Limbo" as a place where forgotten characters vanish to until they're needed for their inevitable gritty reboot...and naturally a potential recruiting venue.

...And, yes, some fans will recognize the name and logo of a competing comics news and gossip site on Uotan's laptop. The less said about that, the better. 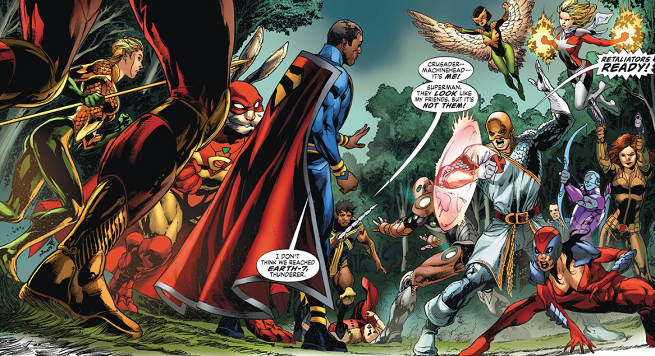 The series, which sees Morrison writing characters who hop between dimensions throughout the DC Multiverse, utilizes Lord Havok and the Extremists and their world -- which is one, many fans will know, that bears a remarkable resemblance to the Marvel Universe.

It also assembles an army from around the Multiverse that gives DC fans quite an interesting grouping of heroes. In addition to the "President Obama Superman" that Morrison used during his Action Comics run, we get a bunch of Marvel homages of all shapes, sizes and colors.

This issue had obvious proxies for:

...And a team of Avengers that seemed to include Iron Man, Hawkeye, Black Widow and others. Identifying them all by sight is tough but it's probably safe to assume everyone who appeared in the movie version was accounted for here. Also, "Retaliators Ready," instead of "Avengers assemble," in case anyone missed what they were looking at.

Now, to be fair, most of those were interconnected in that the Doctor Doom proxy was wielding a number of powerful cosmic weapons -- itself a wink and a nod, perhaps, to one of Doom's most regular modes of operation.

There's also a brief story beat where Captain Carrot beats the snot out of the Hulk proxy on Earth-8, which is more or less a staple whenever DC or Marvel use thinly-veiled versions of one another's characters, is that the "other guys" get their butts handed to them.

The Thunderer also wore what appears to be Deadpool's logo, although he has no real similarities to Deadpool unless you count the fact that at one point he's standing over the bodies of all of his world's heroes, a la Deadpool Kills the Marvel Universe.

What's interesting is that while the Thunderer comes from Earth 7, at one point the heroes mistakenly navigate their way to Earth 8 en route. There, they find another grouping of the Marvel Pastiche League (although mostly less obvious ones). Apparently, here Morrison is going for the idea that worlds in close numerical proximity are conceptually similar (their Earth 8 is about as closely related to Earth 7 as are our Earths 1 and 2...or rather, 0 and 2, since The New 52 universe is Earth 0. 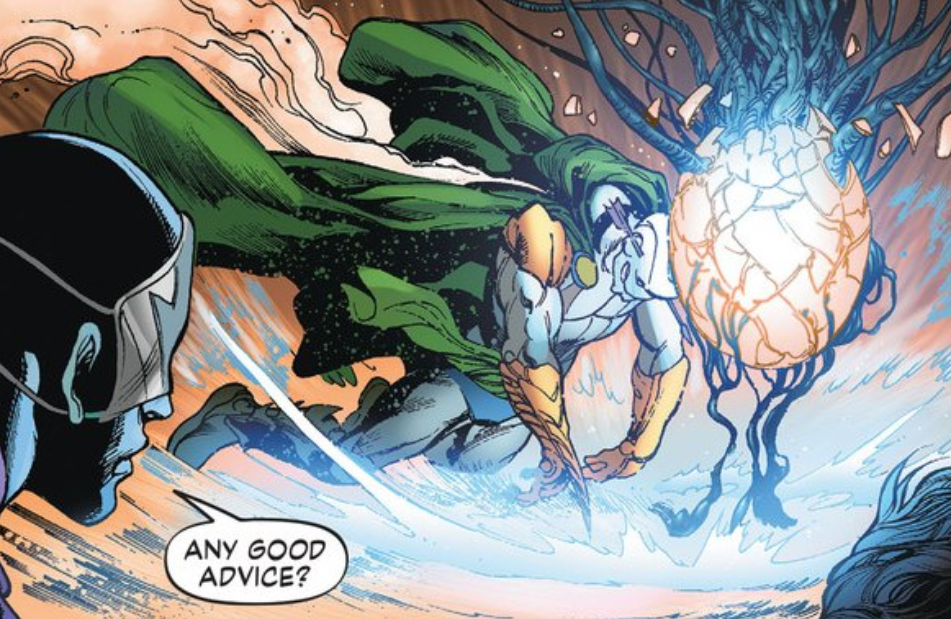 Lord Havok's death at the hands of the Hawkeye character here is also notable in that during a previous DC Comics Crisis event, Zero Hour: A Crisis in Time, the all-powerful Parallax was "killed" by Green Arrow. 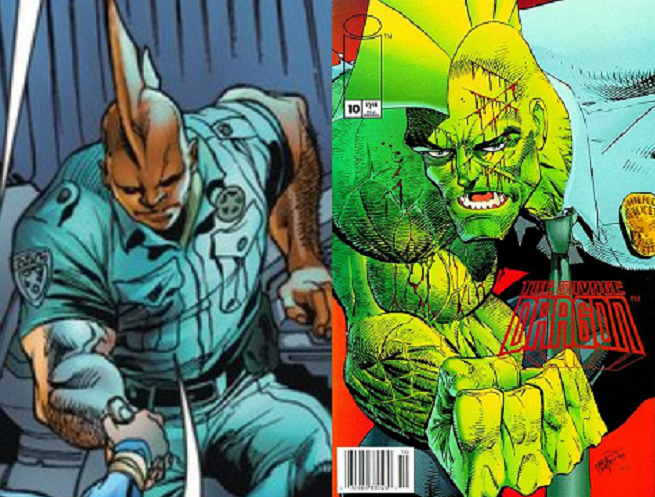 While DC and Marvel frequently create alternate versions of one another's heroes in order to have unofficial crossovers where the JLA can beat up on an Avengers pastiche or vice versa, it's less common for writers and artists to acknoweldge other worlds' superhero universes.

We got a quiet, sly one recently when the letterer on Aquaman and the Others appeared to have inserted a Quantum and Woody joke into a sound effect, but that's a far cry from actually depicting a character who is clearly supposed to be a creator-owned, Image Comics hero.

Erik Larsen, of course, recently provided a variant cover for an issue of Batman/Superman and has had his own take on other people's heroes in Savage Dragon and other books numerous times, with roles varying from background wedding guests to actual, recurring characters (he even had the Golden Age Daredevil, a public domain character, appear as a major supporting player in Savage Dragon for about 25 issues at one point).

Interestingly, while Malcolm Dragon -- the new star of that series and the son of the original Savage Dragon -- isn't a police officer, he is closer to that color than Dragon is. 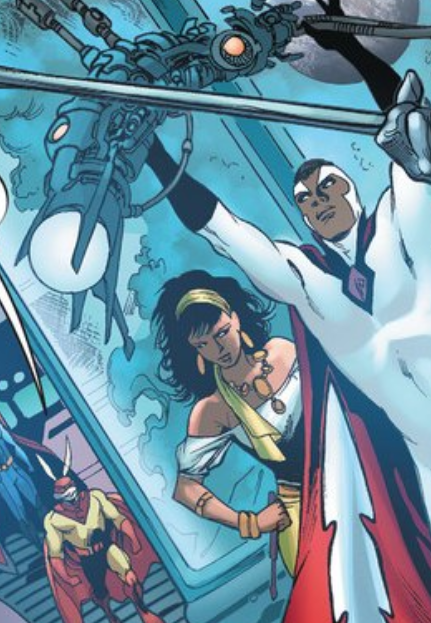 We haven't seen Bloodwynd in quite some time. Created during Dan Jurgens's Justice League of America run (which had the unenviable task of taking the Giffen/DeMatteis characters and status quo and returning it to a more standard superhero book), the character is a necromancer whose power is focused through that gem on his chest.

if there's some confusion about what happened when in his character history, it's because at one point J'Onn J'Onzz, the Martian Manhunter was impersonating Bloodwynd while the latter had been captured by a villain. During that time, J'Onn remained with his old Justice League compatriots as Bloodwynd, a secret he did not reveal to them until it was discovered by Ted Kord, the second Blue Beetle, who will appear in The Multiversity.

(Also, yes, that's a version of Gypsy next to him, but since she played a role in Justice League of America's Vibe, calling attention to her is kind of like calling attention to any of the other many alternate universe versions of people we recognize here; unless there's some specific insight about THAT version, just a mention should suffice.) 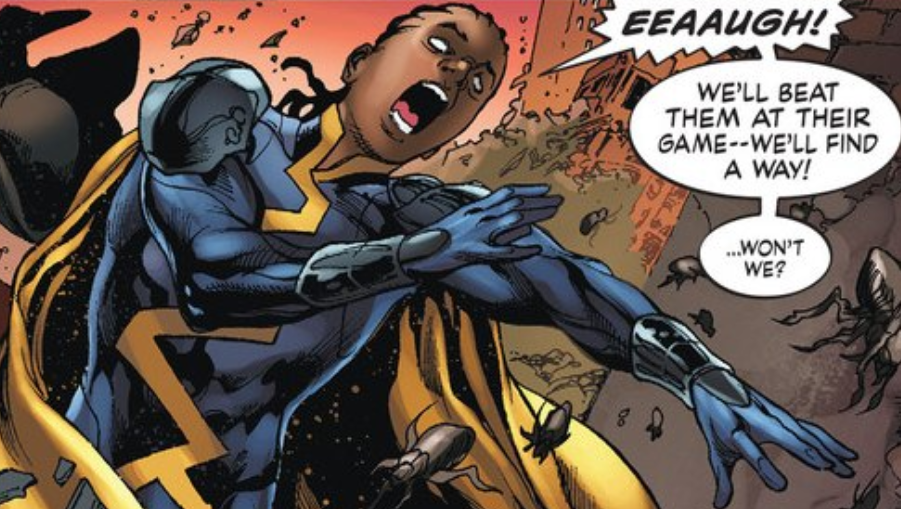 The sole Monitor left standing following the events of Final Crisis, Nix Uotan has long been considered the potential jumping-off point for The Multiversity since Morrison tends to follow up on such dangling plot threads. That the universe has been reset and it's not clear Final Crisis ever happens seems academic, since Morrison flaunted the revised history all throughout his Batman Incorporated run.

At the end of Final Crisis, we saw him reborn in a seemingly-human form in Metropolis, something that plays throughout the issue.

An anthropomorphic superhero and the leader of a team of same, Captain Carrot had a number of adventures before his kind of light-hearted book fell out of favor in the comics industry. They've tried to bring him back a couple of times since, including a New 52 iteration that didn't take with fans (he was reinvented as a gritty sci-fi antihero, basically).

Morrison used him in Final Crisis as well, appearing in the final issue as part of the big battle. His powers, having previously been stripped in his "last" story, were restored by Nix Uotan.

The character will also appear as an Easter egg on an upcoming episode of Arrow. See above. 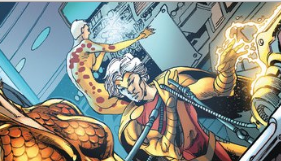 A resident of the pre-Crisis on Infinite Earths Earth-6, she was part of a superheroic ruling family on that world, which was ravaged in the Crisis, leaving her homeless.

She wandered a bit after that, appearing with the L.E.G.I.O.N. and as a supporting player here and there before playing a major role in Infinite Crisis and Final Crisis, like so many other characters who had been instrumental in Crisis on Infinite Earths and then not really connected with an audience when it came time to sell their own books. 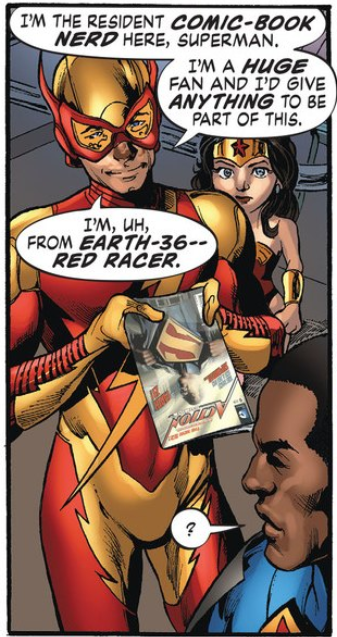 The Earth-36 equivalent of The Flash has a lot of trivia in his head, and provides the superheroes with a bit of a handbook to the multiverse as they move around. In fact, he justifies his tagging along on the mission to his Green Lantern-like boyfriend by saying that the heroes will need his knowledge of comics -- which apparently includes both DC and "Major," the Marvel-like company who publish the events of Earth-7 and Earth-8.

It's difficult to say since they don't get a lot of screen time.

My first instinct was that they were meant to evoke Yale Stewart's Harvey-nominated webcomic JL8 and if so...well, that's poorly timed, since Stewart stepped away from the strip this week amid controversy.

Mentioned above, so we'll just touch on him here -- but Calvin Ellis is the Kalel of Earth-23, where he's black, and he's the President of the United States (but in his secret identity, not as Superman). Morrison first created the character in Final Crisis and has used him a couple of times since -- and since Captain Carrot also reappeared in Final Crisis #7 -- Ellis's first appearance -- it suggests that perhaps Captain Carrot is right when he says that he's met Ellis before (Ellis doesn't remember it). Could he be forgetting because of the universal reboot that came with the New 52? Or another reason?

Early in the issue, President Ellis has a meeting with General Eiling, who of course is The General, a supervillain, in the main DC Universe. A version of the character will appear on TV's The Flash this year.

He also has ties to Captain Atom, who has been a key player in a number of Crisis-level events in DC's past.

The classic Superman villain, who played a major role in Morrison's Action Comics run, is reduced to Superman's iPhone app on Earth-23. 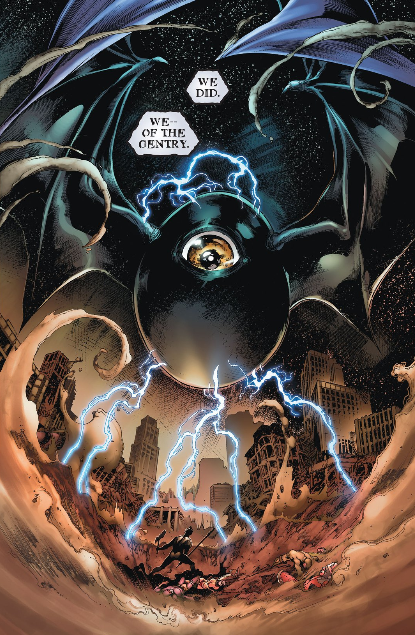 Is he meant to be Thor? No, becuase there's a reference to a Mjolnir-like tool that Lord Havok has. That emblem on his chest seems very Deadpool-like.

Anyway, this cast-off from the not-Marvel Universe is named for the Thunderers of Qward, an army of disposable villains based on the antimatter universe that used to terrorize Green Lantern all the time.

Qward and by extension the Thunderers played a significant role in Crisis on Infinite Earths.

UPDATE: Noted in the comments below, it appears that Thunderer has been used as a Thor proxy in the past and that ax is his; I simply misread the name of the ax to be the name of its bearer, and since Lord Havok didn't say anything ABOUT Thunderer at the time it confused me. He does, however, retain the lightning bolt that the Thunderers of Qward have!

While not technically the same being, The Gentry's motif of being a huge, floating orb with a giant eye is something that Morrison villains have done a few times before, notably Solaris in DC One Million.

The bat-wings is a visual cue we find repeated in a number of his villains, too, from The Invisibles to Final Crisis to here. And, y'know. In his long and celebrated Batman run, but that hardly seems fair to count. 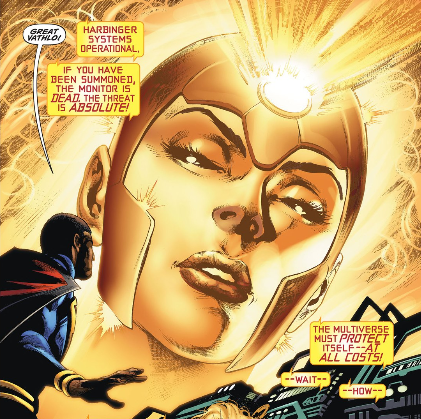 Here, she's apparently the Monitors' security system -- but in the Crisis on Infinite Earths and in the years that followed, Harbinger was Lyla Michaels (yes, the woman who used to be married to John Diggle on Arrow).

Lyla looked pretty much like the projection we see here, except not gigantic and monochrome.