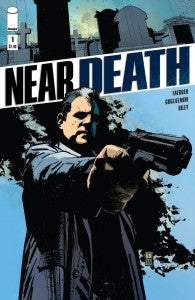 This week, we talk to comics and television writer Jay Faerber about his Image title Near Death, the first collected edition of which has just been released in trade. Near Death centers around a hitman who, following a near-death experience, decides to turn his life around to avoid ending up in the hell he saw while briefly medically dead. Faerber is also a writer for Ringer, a show on the CW Network which reportedly completed filming its first season just today. Ringer airs Tuesdays at 9 p.m. You can check out Faerber's Facebook fan page, his IMDb page or follow him on Twitter. We're also joined by Matt Kindt, the Harvey Award-winning creator behind graphic novels like Revolver and 3 Story. He's preparing to launch two monthly titles in April and May--a creator-owned book at Dark Horse and a New 52 superhero book at DC Comics.

Today's music is the theme from Mystery Science Theater 3000.  It's a great song, from a great show, and the guys who made it are still active over at RiffTrax, and have had some darn cool stuff come out recently. I'll be talking about a few of their recent release in an article coming up in the next couple of weeks, and of course look out for Manos: The Hands of Fate, coming soon.

Our sponsor is Single Bound Studios.  If it deserves to be preserved, then bind with SBS.  Single Bound Studios has something for everyone from preserving those keepsake receipes in one place to the comics that your partner asks why one more long box?  Find them on line at singleboundstudios.com