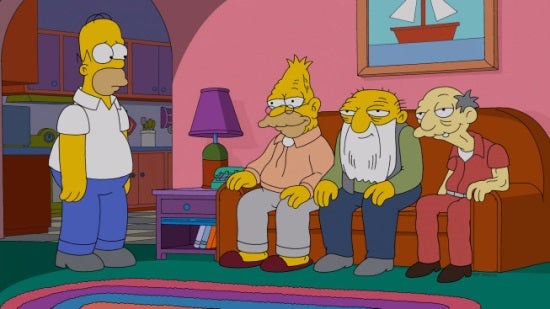 A new episode of The Simpsons, called "The Winter of his Content," will air tonight on Fox. In "The Winter of his Content," Marge invites Grampa and two other octogenarians to live at the Simpsons' house after the Retirement Castle is closed for health violations, but she quickly becomes frustrated with Homer when he starts embracing the "old person lifestyle." Meanwhile, at Springfield Elementary, Bart defends Nelson's affinity for hand-me-down underwear, leading Nelson to befriend Bart. The voice cast includes Dan Castellaneta as Homer Simpson; Julie Kavner as Marge Simpson; Nancy Cartwright as Bart Simpson and Nelson; Yeardley Smith as Lisa Simpson; Harry Shearer as Skinner; Hank Azaria as Moe, Pamela Hayden as Milhouse and Jimbo; and Tress MacNeille as Dolph. The Simpsons, "The Winter of his Content," will air Sunday, March 16 at 8 PM ET on Fox.

The Simpsons Season 25 Episode 14: The Winter Of His Content