Before we begin, a note: 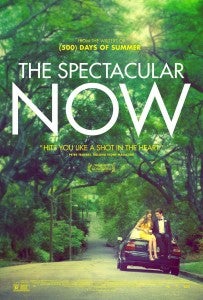 we thought that there was more than enough general interest on the part of our audience to take a look. Aside from being a vehicle for Divergent's (and maybe Amazing Spider-Man 3's) Shailene Woodley, it features 2 of the lead actresses from Scott Pilgrim vs. the World and the main female character reads sci-fi mangas.

The Spectacular Now is a much better film than the opening scene indicates. What starts off looking like an indie reboot of American Pie quickly morphs into a very sweet and true to life coming of age story.

Sutter Keely (Miles Teller) is a High School Senior who has just broken up with his girlfriend Cassidy (Brie Larson). Surprised when his usual charm and eloquence fails to win her back, Sutter gets very drunk and wakes up on the front lawn of the shy and quiet Aimee Finicky (Shailene Woodley), a classmate Sutter doesn't even recognize. Sutter and Aimee begin to spend more and more time together, even as Sutter continues to test the waters with Cassidy and insists to his best friend that he is simply being altruistic to the unpopular girl. Sutter manages to be both a good and bad influence on Aimee, she does her best to help him through a few unresolved issues as well. But while Aimee and everyone else in his life is looking towards the future, Sutter insists on simply enjoying the spectacular now.

Miles Teller owns the movie from the start, with a terrific performance. The character of Sutter, who is an irresponsible alcoholic (He literally is seen drinking in over half the scenes in the movie) could easily be an unlikable protagonist. Instead, Teller manages to charm the audience with the same ease that his character charms the other people around him. As Aimee, Shailene Woodley gives a very strong performance to a somewhat weak character. Aimee has potential at first, she is skilled with math and reads sci-fi mangas about strong female characters, but all that is forgotten quickly. With so little of the character fleshed out besides these few interests and the occasional glance at her dysfunctional family life, it is a bit hard to see why Sutter falls for her in the first place. Still, Woodley manages to infuse Aimee with sweetness and heart, and her chemistry with Teller is undeniable. Mary Elizabeth Winstead is great and unfortunately underused as Sutter's older sister Holly, with Jennifer Jason Leigh and Brie Larson as his mother and ex-girlfriend, playing the films stronger female characters very well. The rest of the cast is also good, with Kyle Chandler especially standing out.

As a whole, The Spectacular Now is a very good film that is worth seeing. Twice.

Emily Donn is an actress who lives in L.A. and occasionally also puts words on paper. One day she would like to be on the sort of TV show that will keep her invited to Comic-con 40 years after its too early cancellation.

The Spectacular Now: A Film Worth Seeing. Twice.