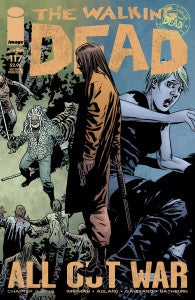 A quarter of the way through the epic "All-Out War" storyline, Image Comics/Skybound's The Walking Dead has sold out of all three parts of the story's first act.

The long-running, critically-acclaimed series that inspired the hit AMC TV drama sold out of its print run for #117 at Diamond Comics Distributors, Image announced today, and will come back for a second print with a new cover.

While the issues are easily available on both ComiXology (with Guided View) and the Image Comics websites (which offers DRM-free downloads), the publisher has stated and restated their commitment to keeping all of the "All-Out War" issues in print for the duration of the story.

The second printing of The Walking Dead #117 will be available on January 15. Issue #118 is on sale now.