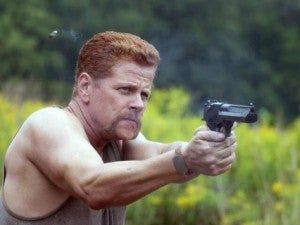 Following on tonight's New York Comic Con announcement that Retired at 35's Josh McDermitt has joined The Walking Dead as Dr. Eugene Porter and Southland's Michael Cudlitz as his traveling companion Abraham Ford, the cast members and showrunner Scott Gimple have reached out to the entertainment press to give their first impressions of the gig, and what the characters' introduction (along with their lady friend Rosita) could mean for the hit zombie drama.

"I was laying low because [Abraham has] a very iconic look," Cudlitz told TVLine. "It would be very easy for somebody to put the pieces together if they saw me strolling around [near the show's set.] So I was staying very close to the hotel. And I didn’t hang out with any of the other cast members."

"Abraham is someone who comes with a lot of emotional baggage. And he’s on a mission," Cudlitz added. "There’s no guarantee of how long or how short it will be, which is one of the things I actually find pretty exciting about the job after being locked into Southland for so many years. But [Abraham] is very important in the comic, so I imagine even if it IS short, it’ll be bright."

"We're going to tell a version of the Eugene, Abraham and Rosita comic stories, that's what we do," showrunner Scott Gimple told The Hollywood Reporter. "I love those characters from the book, they are very different flavors of comic book characters than we've seen on the show."

"Josh looks breathtaking in a mullet, he was born to wear one," Gimple added, echoing what he said on stage at the convention. "I can proudly announce we will see a mullet!"

Asked when we might start to see the trio (we're guessing after the midseason break, or right around there), Gimple said, "We're going to get to those characters in a bit but before that, we're going to be exploring a lot of different locations. We're at the prison the first two episodes. We start looking at other places in episode three on but that isn't even tied with them yet."