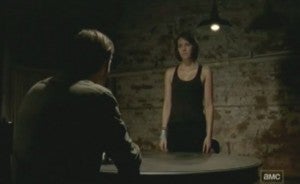 Please note there are spoilers ahead for tonight's episode of AMC's The Walking Dead, titled "When the Dead Come Knocking."

After some pretty intense TV spots for this week's episode of AMC's The Walking Dead, did the episode live up to your expectations? It didn't mine.

That's not a bad thing, honestly--my expectation was that the episode would extremely hard to watch. Those ads, coupled with a working knowledge of the source material, led me to believe that Maggie and Glenn would have something of a rougher go of it in their respective interrogations, and it was a pleasant surprise when they didn't.

Still, for a TV series that has based so much of its identity on the idea that anything can happen, that they won't shy away from some of the more horrible things that have happened in the comics, it seemed a bit like they did just that. Shying away from rape is understandable, but coming on the heels of a newborn surviving its mother's death, it almost seems as though the show is starting to show its boundaries a bit.

Again, I have no particular desire to see things get even darker and more gruesome; one of the benefits to a comic book is that you can depersonalize the characters a bit so that when this kind of thing happens you don't have to see the very real eyes of the actors. Still, one of the problems in adapting an existing work is that many of that work's fans won't be thrilled when you're perceived to have cut corners. Throughout the show, The Walking Dead has been pretty good about avoiding that. How do you think they did this week?

The Walking Dead: Did They Cop Out This Week?