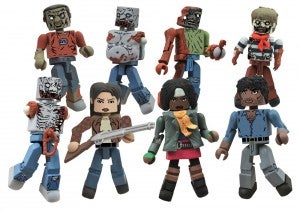 Following a great response from fans and retailers to the planned first wave of Minimates toys based on Robert Kirkman's smash-hit The Walking Dead, Diamond Select Toys announced today that there will be a second wave of the figures hitting in November.

The figures will be pretty zombie heavy, as you can see by the images at right, and read from the official release:

This September, the world of Minimates will be invaded by zombies! The first series of Minimates based on the Walking Dead comic book by Robert Kirkman is scheduled to hit in September, and Diamond Select Toys is already hard at work on the second series, slated for a November release. Like the first assortment, every human character will come with a zombie, and there will be a zombie two-pack to help pad out your zombie herd. 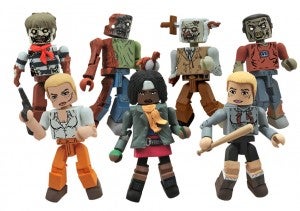 The Walking Dead Mini-Mates Come Back With a Second Wave