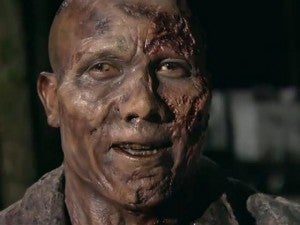 Last year, ComicBook.com reported that former Pittsburgh Steeler Hines Ward was going to make a cameo appearance as a zombie on AMC's The Walking Dead.

Apparently he was fast enough to outrun an earthquake in The Dark Knight Rises, but not to outrun the plague that collapsed society on the hit zombie drama.

In any event, at the time there were a couple of photographs of makeup tests and the like, but today a new photo surfaced on The Bleacher Report's Facebook page, now we get to see it in action (or at least what appears to be action; the background images are blurry but it looks to be one of the show's sets).

It's hard to tell whether he might be in or near Woodbury (with that grey-green thing on the left, then, being a tree and the structure behind him being the exterior of a building with pilars and electric light) or the prison (with that grey-green thing being a dingy basement wall and the structure behind him being a cell or other concrete room with light pouring in from a window). It could be somewhere else entirely.

One thing is certain--per the description at The Bleacher Report--is that Ward will appear in "The Suicide King," February 10's midseason premiere. So while he's no longer in the NFL (instead serving as an analyst for NBC), he'll actually be on TV the week after all the active players go home.

Not that he'll have the bra(aaaaa)in power to appreciate the irony, of course.

The Walking Dead: New Photo of Hines Ward as a Zombie