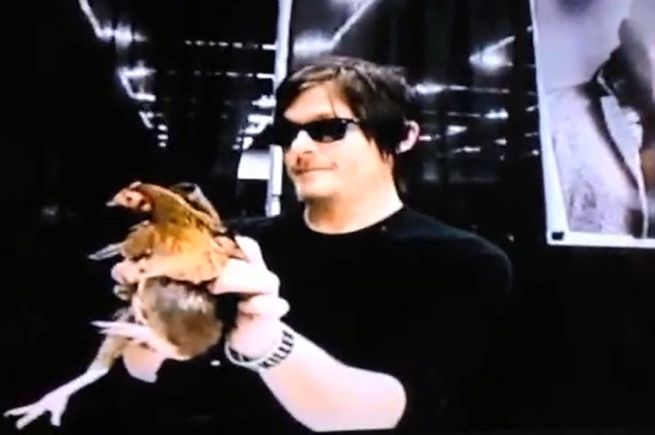 On Thursday night’s Jimmy Kimmel Live, Norman Reedus was a guest, and as usual he had a number of interesting stories to tell. When Kimmel asked Reedus if the people dressed up like zombies on Hollywood Blvd. ran when they saw him, Reedus said, ‘No,” but he did tell a story about another costumed encounter.

“I went down to a Coffee Bean, and there was a Dora the Explorer on my way out, so I took a picture. And I started walking. She starts chasing me down the street, going, ‘You [bleep], you owe me $5,” said Reedus.

Kimmel pointed out that the costumed characters liked to be paid for their copyright infringements.

Kimmel also pulled out a photo of Reedus holding up a chicken and asked what was going on in the photograph.

“We’re based on a comic book, so we go to these comic book things,” said Reedus. “But there was a lady that walked up in a trench coat. And she was sort of nervous. And she goes, ‘Will you hold my chicken?’ And I said, ‘What?’ And she opens up her trench coat and pulls out this chicken. So I held her chicken.”

When Kimmel asked why the lady had a chicken, Reedus explained, “I think it was her comfort animal, like she had a doctor’s note or something. She was very sweet.”

After the chicken story, Reedus talked about two girls that came from Tokyo to meet him and asked him to blow in a bottle, so they could take his breath back to Japan. Kimmel and Reedus also flipped through Reedus’ new book of fan art, which is raising money for charity.