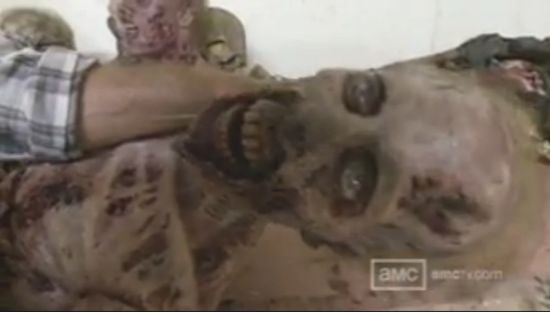 Nictero said, “So what we did this year is that we wanted there to be a sense that if a walker has been killed that has been laying in the sun for five months, six months, seven months that it’s sort of rotted and decayed. So some of them were made out of silicone and some of them were made out of latex, so that we can lay them around the set and you can see a great shot of this thing laying somewhere to convey a sense of time that these things have been sitting in the sun and decomposing.”

In addition to really being able to see the rot and decay on a zombie, Nictero also promised fans more blood. Nictero said, “This season one of the things that we wanted to do was to be able to bash, crush, smash, destroy some of our walkers. So one of the things that we did at the end of last season was these are all hollow and what we’ll do is we’ll fill this up with blood, and we’ll seal this in. Then, we’ll put wardrobe on it and we’ll put a wig on it so that this walker will be walking around going ‘how’s it going, please don’t kill me.’ Then, he’ll get knocked over and you’ll see a great close-up of a sledge hammer or axe smashing into it, and blood will spray everywhere, and the ratings board will love it.”