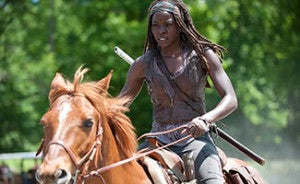 A preview of the upcoming fourth season of AMC's The Walking Dead will air on Sunday during the network's new hit series Low Winter Sun, which stars Green Lantern villain and potential Lex Luthor Mark Strong.

Here's the official statement from the network:

Attention The Walking Dead fans! Ready for your first look at a scene from Season 4? Then tune in to AMC this Sunday between 10 and 11PM ET/PT and catch the debut of a special sneak peek that will air during AMC’s new original series Low Winter Sun. If you haven’t seen Low Winter Sun yet, you can check out this all-new video recap that will catch you up on the first two episodes in just 45 seconds.

Whether it's something entirely new or one of the same scenes that was used as the promo material at San Diego Comic Con International last month isn't yet clear. You can see the Comic Con promo reel below.