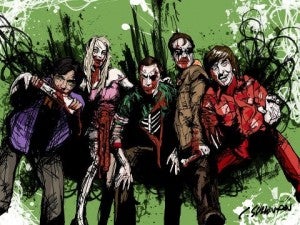 Want to see your favorite stars from The Big Bang Theory and The Walking Dead on the big screen?

You're in luck! Fathom Events by CineMedia will break new ground for PaleyFest this year, streaming the panels for The Walking Dead and The Big Bang Theory to about 525 theaters nationwide.

“For the first time, fans will be able to join in the excitement as we bring the ultimate TV fan festival experience to theaters across the country,” said Paley Center for Media President and CEO Pat Mitchell. “Partnering with NCM Fathom Events as part of PaleyFest’s landmark 30th Anniversary allows fans of The Walking Dead and The Big Bang Theory to see their favorite television actors and creators, and highlights the Paley Center’s continuing effort to bring the fun and excitement of PaleyFest to more and more people. We are grateful for the participation of the cast, creative teams, along with AMC and Warner Bros., for their continuing support and enthusiasm for these special PaleyFest evenings.”

On March 7 at 8 p.m. local time, participating theaters will screen a pre-recorded “PaleyFest Featuring The Walking Dead.” Chris Hardwick will moderate the panel, which will include series actors and executive producers. On March 13, theaters will show a live feed of “PaleyFest Featuring The Big Bang Theory” at 10 p.m. EST/7 p.m. PST. Audiences at the live feed will be allowed to use their cell phones in order to tweet questions at the panelists.

“PaleyFest is the ultimate TV fan festival that until now, only fans lucky enough to score tickets to the L.A. event could enjoy,” said Shelly Maxwell, executive vice president of NCM Fathom Events. “Thanks to the Paley Center, now all fans of these popular TV shows can enjoy the festival from their local movie theater as the cast of each show takes part in a live, uncensored and no-holds-barred audience Q&A.”

The Paley Center typically do a live webcast of PaleyFest panels, which can also be viewed later via the organization's website.

The Walking Dead, The Big Bang Theory Coming to Theaters in March