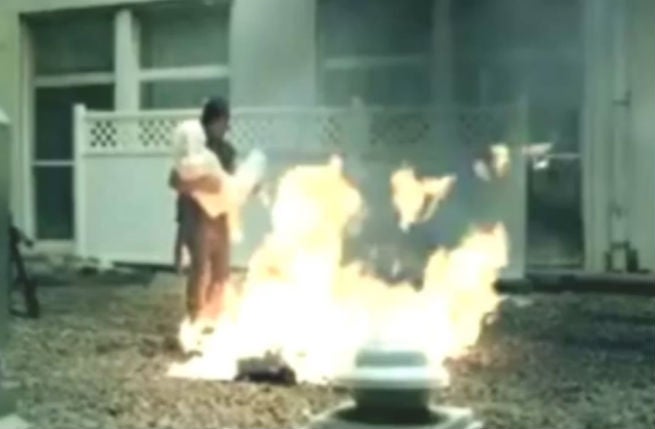 Last night, Talking Dead host Chris Hardwick spurred a good deal of online discussion by suggesting that a body Daryl Dixon is seen burying in a preview for next week's episode of AMC's The Walking Dead seemed "Beth-sized."

We're not inclined to get on board with that reading of the episode, but it seems worth a little bit of consideration, certainly. With three episodes remaining until the midseason finale, it seems likely we're going to get a bit of bloodshed sooner than later, and everyone in Daryl's little group -- Daryl, Carol, Beth and Noah if you count him -- are characters who don't exist at this point in the comics, so you can never be totally sure when they're going to be lost.

Now, as far as I can tell, it isn't Beth (or Noah). Why? Because using the high-tech tools at my disposal (YouTube and a flexible tape measure), it appears as though the body Daryl is carrying is fairly short -- enough so that the head would reach the top of his neck at best.

Beth, depending on which photo you look at, often appears nearly as tall as Daryl, but always at least comes up to his cheekbone or so. In real life, Norman Reedus is 5'10" and Emily Kinney is 5'5". As someone who is 5'10", I can say with some confidence that my head is larger than 5" tall. In fact, measuring from the crown of my head, 5" comes down around my ears (that would be roughly where Beth stands next to Daryl, then), while measuring down to the top of my neck would make the person around 5' or 5'1" at best.

Tyler James Williams, who plays Noah, is 5'8", meaning that he's even more unlikely to be the body in the shroud.

This is obviously pretty rough work, but I'm satisfied with it, because it affirms suspicions I already had that the body is probably that of a child. Between the loss of her own daughter and then being forced to put Lizzie down last season, few things could make Carol seem as overwrought as she is in that scene...but a dead child is likely one of them.

On the matter of Carol, too: she's got no injuries evident, so it seems likely this episode takes place before she's admitted to the hospital where Beth will encounter her. That's another strike against the body being Beth...or Noah, really, since he has to escape more or less at the same time as she would be getting injured (or, yes, maybe faking it).

The Walking Dead will be back on Sunday at 9 p.m. ET/PT on AMC.

The Walking Dead: Whose Body Is Daryl Burning?