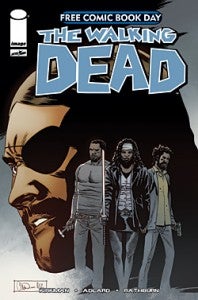 Robert Kirkman, writer and creator of Skybound's best-selling comic book series The Walking Dead, gave his fans a little more incentive to head out to the stores on Free Comic Book Day this year: A story they won't be able to get anywhere else.

The Walking Dead Free Comic Book Day Special will hit comic book stores on the first Saturday in May, featuring four short stories--one based on Michonne, one for the Governor, one for Morgan and one for Tyreese. While three of those four have been previously printed in other places, the Tyreese story is new--and won't end up in any trade collections, so this may be the only place to get it, at least for a while.

"This season of the show, especially in the second half that is airing now, The Governor, Michonne, Morgan and Tyreese are all prominently featured.  I noticed we happened to have six page stories for each of these four characters except for Tyreese... and so I thought it would be cool to release a book collecting them all, with a new Tyreese story, for Free Comic Book Day... as something that would be a cool thing to promote and get people into comic shops for a free comic," Kirkman said. "Just trying to make fans of The Walking Dead who buy things in trade paperback form aware that they should snag this free comic in order to get everything. So yeah, it's all an effort to get as many people in stores as possible, on top of providing fans with something cool for free."