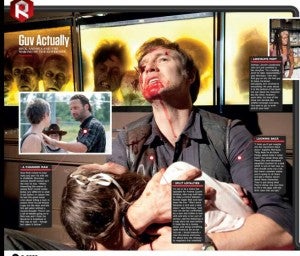 In a new interview in SFX, on the stands yesterday, The Walking Dead villain David Morrisey laid out an agenda for his character for the rest of the season--and it ain't pretty.

Morrissey, who plays The Governor, said that the experience of the midseason finale has left his character a different person altogether--that's an interesting twist, suggesting that Rick Grimes and his pack of survivors may, however inadvertently or inevitably, have created the more cold, sadistic Governor fans know from the comic book series.

"He's lost his daughter, he's lost his eye, he's been brutally attacked by someone and his town has been attacked by this outside force," explained Morrissey. "He feels as though he's been betrayed by one of his own, Merle Dixon, and now they've captured Merle's brother Daryl the crowd are baying for blood. They are bloodthirsty and angry, and I think he wants to keeep them that way - they want revenge and so does he. The mood he's got into means he's a changed man. There is a humanity inside him, but it's closing down very quickly, and I think that where we take him now is about what happened to the humanity in him. Will it grow again, or will it break down completely?"

Asked how much humanity the character had to begin with, given that he was seen hanging out in the world's most disturbing media room and killing outsiders for seemingly no reason at all, Morrissey seemed to contend that the character was doing what he thought was best for Woodbury at the time.

"I think what's interesting about slaughtering the army guys is that if you're the leader of a town and you have authority, the last thing you want is an army coming in there who can take authority. You don't want seven or eight guys coming in who are armed and dangerous - it's not what you need. So it's quite a cold-hearted decision that he makes there, but it's an understandable decision for me. It's a tough thing to do but from a leadership point of view he has to do it. And when he comes back he tells the crowd that when he arrived they had all been killed by walkers, because they don't have what we have - walls, security, fences. What he's sayin gto them is that they didn't have me to protect them and that's why they're dead. That's an amazing spin, I think, of leadership. I love that about him, I love the fact that he can play that."

He adds that he perceives the Governor as kind of a middle-management type in the world before the apocalypse, and that he was simply thrust into a position where power has corrupted him. And while he knows that the villain will eventually meet his maker, Morrissey told the magazine that he would like to stay aboard the hit series as long as possible.

The magazine also had a particularly intriguing two-page spread, in which Morrisey gave brief teasers of the season to come:

[Note: There's an argument to be made that Rick's lack of a moral code has hurt him more than anyone else so far; the man he threw to the wolves returned to put the whole group in danger and his actions led indirectly to the death of Rick's wife.]

There's a bunch more to be seen, so check out the issue on the stands now (they don't seem to upload the full interviews to their website).

The Walking Dead's Governor Teases the Rest of the Season