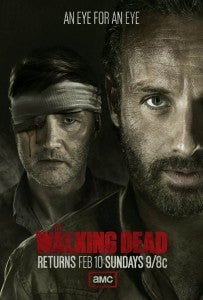 AMC has revealed the official promotional poster for the midseason premiere of The Walking Dead.

The episode, which kicks off showrunner Glen Mazzara's final leg on the award-winning ratings smash, will air on Sunday, February 10.

Mazzara and AMC recently separated, citing creative differences. This could lead to a very dark turn for the series, as the showrunner had previously revealed that it was just him advocating for a little brightness and hope in the series, and that without him, the writers might be more prone to killing baby Judith or allowing Michonne to be brutally raped by the Governor.

The artwork features Rick Grimes (Andrew Lincoln) and The Governor (David Morrissey) staring straight ahead with the tagline, "An Eye for an Eye," referring to the injury the latter suffered at the hands of Michonne in the midseason finale, "Made to Suffer."