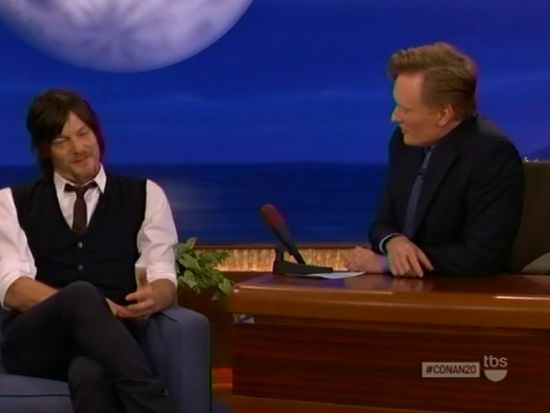 On Thursday night, Norman Reedus, who plays Daryl Dixon on The Walking Dead, was a guest on CONAN. Reedus shared with Conan O’Brien some of the more unusual things he had received from fans, as well as revealing the secret of how he broke into acting.

“I had this one girl, big audience full of people, this one girl raised her hand, and I called her up,” said Reedus. “And she walked up with this clear bag that had meat in it in this yellow foil. And I’m like, ‘What’s that?’ She goes, ‘It’s squirrel.’ And I’m like, ‘What?’ And she goes, ‘I hunted it down with a shovel.’ And the first thing I thought was, ‘Wow, you’re pretty fast.’”

However, squirrel meat wasn’t the most unusual gift from a fan. Reedus added, “I had one girl send me a breast implant. She said she read in an interview that I sounded depressed, so she sent me her breast implant. I use it as my phone cradle in my trailer.”

In regards to how he landed roles in Hollywood, Reedus revealed his secret to success. “Going on auditions, I just assumed everyone hated me, so I would just give everyone dirty looks all the time,” explained Reedus. “But I think somehow that dirty look turned into an acting career. I don’t know. I pretty much murder everybody on everything I do.”